This bank's acquisition strategy has enabled it to grow its dividend for decades.

Dividend stocks can be an excellent source of income for retirees, and Dividend Aristocrats in particular can be great investments. A Dividend Aristocrat is a company in the S&P 500 that has increased its dividend for at least 25 consecutive years.

However, some companies slip through the cracks simply because they are not included in the S&P 500 index. Once such company with an impressive history of increasing its dividend is United Bankshares (UBSI -0.21%), which has increased its dividend for 47 years straight and delivers investors a solid 4.3% yield. While it may not be a Dividend Aristocrat, that shouldn't discourage income investors from investing in this solid bank stock. 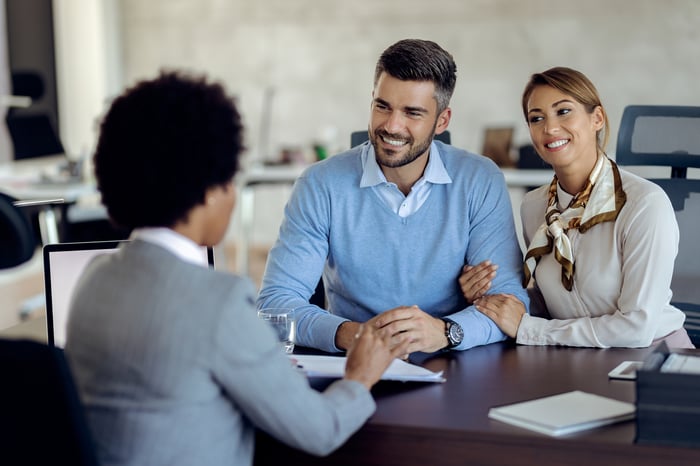 United Bankshares is a regional bank that provides community banking and mortgage banking to customers across the mid-Atlantic and southern U.S. The bank has achieved an impressive history of growth thanks to its 32 completed acquisitions since it incorporated in 1982, including its most recent acquisition of Carolina Financial, which closed in March 2020.

The company's expansion into the Carolinas gives it a footprint in one of the fastest-growing areas of the U.S. The company ranks as the ninth-largest bank in South Carolina and the 17th-largest in North Carolina in total deposits after adding Carolina Financial. It also ranks No. 1 in the Washington, D.C., area among regional banks and is the second-largest bank in West Virginia.

The expansion continued in the second quarter of this year, when United Bankshares announced plans to acquire Community Bankers Trust for roughly $300 million in stock. The potential 33rd merger would expand the bank's footprint in Virginia, adding 18 offices there and another six offices in Maryland. Richard Adams, CEO of United Bankshares, said: "This transaction enhances our existing presence in the DC Metro MSA [metropolitan statistical area] and takes us into new markets including Baltimore, Annapolis, Lynchburg, Richmond, and the Northern Neck of Virginia. It also strategically connects our Mid-Atlantic and Southeast footprints."

United Bankshares has had lackluster stock performance over the past few months, with the stock down 20% since its recent peak in mid-May. The SPDR S&P Regional Banking ETF is down just 4% in that same time period. Investors shouldn't fret, though, because United Bankshares is a well-run bank with a solid capital position, and it has displayed good long-term growth that supports its increasing dividend payouts.

The bank has seen steady growth continue in the first half of this year, with net interest income of $377 million up 21% from last year. It also benefited from an improving economic backdrop, with its provision for credit losses reflecting better performance trends on its loan portfolio as well as improved forecasts for economic conditions. The provision for losses decreased drastically from last year, providing a benefit to the income statement of $8.7 million. Last year the provision reduced net interest income by $73 million. Growth in other income was solid too -- up 24% to $155 million -- which helped diluted earnings per share (EPS) grow 86% during in first half of the year.

The bank is in good position to grow its dividend

In the second half of the year management expects loan growth, excluding PPP loans and loans held for sale, to increase in the low to single digits, with activity in its North Carolina and South Carolina markets being strong.

Analysts covering the company expect EPS to come in around $2.63 for the year, which would represent a growth of 9.5% from last year. Average estimated revenue is expected to be $1.02 billion, a decline of 3% from last year. To go along with these projections, analysts have price targets ranging from $39 to $43, which represent a 22% to 34% upside for the bank.

United Bankshares is a well-run bank that has done a stellar job of growing via acquisitions of other regional banks. With 32 acquisitions since its founding, the bank has been able to gradually increase its footprint in the mid-Atlantic and southern regions of the U.S., growing its deposits and net interest income consistently. This long-term growth, along with a payout ratio of 46% (meaning the bank's dividend payout amounts to just less than half its earnings), should give United Bankshares investors confidence in the bank maintaining and increasing its dividend.

Buy This Stock Before It's Crowned a Dividend King

3 Bank Stocks That Will Pay You Passive Income for Years

Forget About Dividend Aristocrats, Here's a Great Income Stock Nobody Knows About