Please ensure Javascript is enabled for purposes of website accessibility
Log In Help Join The Motley Fool
Free Article Join Over 1 Million Premium Members And Get More In-Depth Stock Guidance and Research
By Courtney Carlsen - Feb 11, 2021 at 7:45AM

This bank has increased its dividend 47 years straight and should be considered by any income investor.

Most dividend investors are searching for a reliable source of income from well-run companies. Some bigger, more established companies do a fantastic job of paying out dividends. The best of them are known as Dividend Aristocrats -- companies in the S&P 500 index that have increased their dividends annually for at least 25 consecutive years.

One company that falls into this category is United Bankshares (UBSI -1.38%), a bank that has increased its dividend for 47 years straight, It's a great income stock worthy of further consideration by dividend-focused investors. 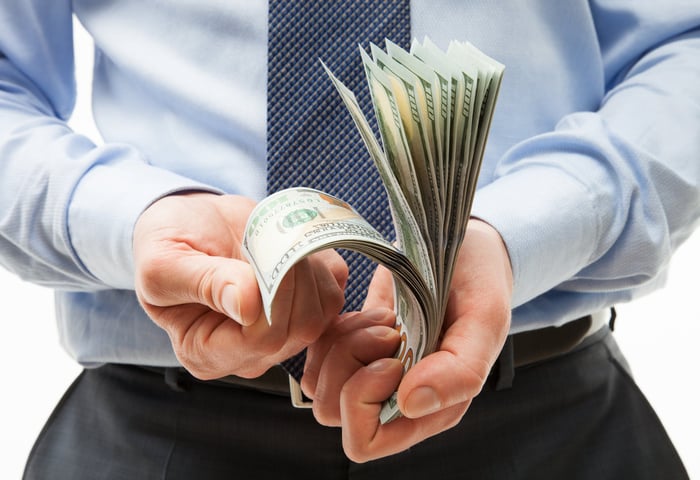 The stock that pays in all kinds of weather

United Bankshares is a regional bank with branches located in mid-Atlantic states. As of 2020, the bank was ranked as the No. 1 community bank in the Washington, D.C., region and the No. 2 bank in West Virginia, based off total deposits.

Last November, management announced that the bank increased its dividend for the 47th year in a row. It has done so through the early 1980s recession, the bear market of the 2000s, the Great Recession of 2008-09, and the global pandemic in 2020, United Bankshares' commitment to raising dividends is nothing short of impressive.

As you can see from the chart below, while the dividend yield fluctuates wildly due to volatile stock prices, the bank manages to create a steady pattern of increasing dividend payouts annually. 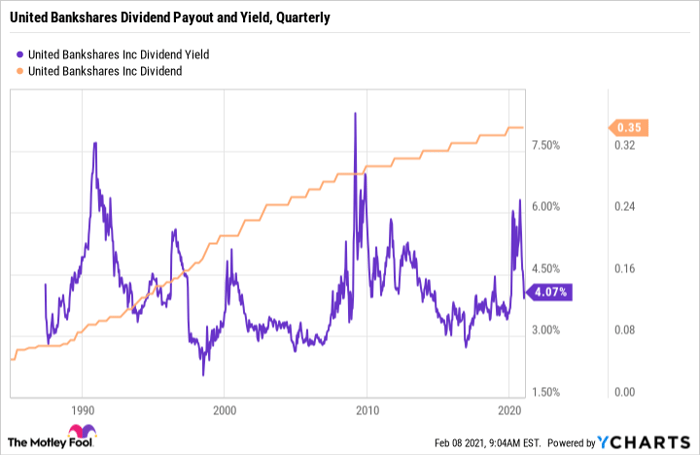 United Bankshares has not only shown strong growth over the years but has also managed to navigate through 2020 smoothly. In the past year, the bank increased net income 11.1%, to $289 million, from $260 million in 2019. This has been due, in large part, to higher income from mortgage banking activities along with positive impacts from its purchase of regional bank Carolina Financial Corp.

Despite a mandated higher provision for potential credit losses related to an adverse future macroeconomic forecast ($106.6 million compared with only $21.3 million in 2019), the bank enters 2021 with strong credit quality. United Bankshares found itself with $3.3 billion worth of loan deferrals on its books, or 18% of its total loans, as of June 30, 2020. In the most recent quarterly earnings, the bank announced only $400 million worth of loan deferrals, or 2% of its total loans, as of Dec. 31, 2020.

In addition, the bank's expansion into the Carolinas with the purchase of Carolina Financial in exchange for 28 million shares of stock shows a continued commitment to growing deposits and income. The newly expanded operations in South Carolina and North Carolina now give United Bankshares a footprint in what are, respectively, the sixth- and 11th-fastest-growing states in the U.S., according to the 2020 U.S. Census.

United Bankshares may not be entering the S&P 500 anytime soon, but that's no reason to ignore this stellar dividend-paying stock. The dividend yield on this stock is solid, coming it at 4.1%.

Management is proud of the ability to continually increase dividends, and this commitment has gotten my attention. The bank has managed to weather 47 years of varying market environments while continually raising its dividend payout, making it a company any income investor would love to buy and hold.

This Dividend Stock Has Increased Its Payout for 47 Years Straight