Cryptocurrencies don't often come cheap. But here are three that have solid fundamental value that can make investors money.

The first few weeks of September were brutal for cryptocurrencies, with major indexes tumbling by as much as a quarter amid concerns that a regulatory crackdown was coming. Those worries are easing, making it a good time to do what stock market investors have done to great advantage in similar situations: use temporary market retreats as an opportunity to pick up premium brands at cheap prices. 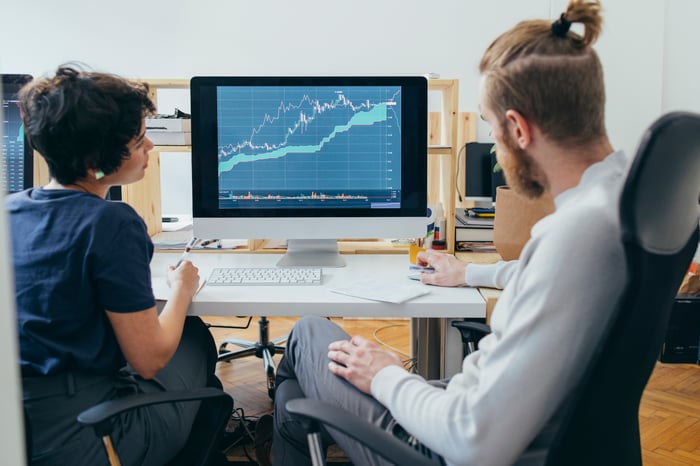 Ethereum has exploded in popularity to become the "reserve currency" of the decentralized finance (DeFi) world. Right now, the Ethereum blockchain powers over $341 million worth of transactions per day using decentralized applications (dApps), or smart contract -- agreements that are triggered automatically. Investors using dApps are purchasing non-fungible tokens, or digital certificate of ownership, which have become red-hot in the art and entertainment world; swapping altcoins -- everything except Bitcoin -- on decentralized exchanges (DEX); or even playing on blockchain casinos.

But here's the game changer: Right now, the Ethereum network runs at a plodding 15 transactions per second. That makes it hard to boost the number of DeFi protocols or dApps it can handle.

That's all set to change next year with the introduction of sharding. In this new setup, network custodians (known as nodes) would only need to keep a copy of the ledger of the transactions they are validating instead of transactions of the entire network. Ethereum developers plan to have 64 shards at inception, which isn't a lot. But Ethereum co-founder, Vitalik Buterin, intends eventually to deploy enough shards to scale the network to more than 100,000 transactions per second, which would exponentially accelerate the development of dApps.

Tether is a stablecoin built on the Ethereum blockchain that is pegged at an exchange rate of 1:1 to the U.S. dollar. The peg isn't what makes Tether appealing, and I don't think investors should try to profit by buying the token when it is trading for $0.9999 and selling it when it hits $1.0000. Instead, they should lend it out and earn interest!

Nowadays, crypto developers and investors alike need loans to cover either the cost of building crypto infrastructure projects or everyday expenses -- without selling their crypto holdings. That's where Tether comes in. On most DeFi platforms, users can earn as much as 12% a year by lending out their Tether. Worry not: Borrowers are required to pledge their own crypto as collateral for the duration of the loan. So if a borrower defaults, the lender automatically gets their money back via execution of a smart contract. In addition, the contracts allow owners of Tether to lend out their coins again, which can produce even higher returns.

Whatever the return, it will be a lot more than the paltry 0.01% to 0.05% paid on deposit accounts at most banks. One cautionary note: Tether holders should only invest in projects audited by crypto-security firms such CertiK. Otherwise, they could very well be scams.

Speaking of which, Aave happens to be one of the DeFi platforms audited by CertiK. Total value locked, or money wrapped in smart contracts, on the Ethereum-based DeFi protocol has surpassed $10 billion.

Aave tokens have returned over about 53,000% since their inception in 2017, even after the latest sell-off. Borrowers can receive reduced fees and borrow more if they use AAVE instead of regular crypto as collateral for a loan.

The platform is unique because it allows users to borrow and lend in 20 different types of cryptocurrencies. These include Tether, as well as pledging ETH as collateral. What's more, Aave works just like a traditional bank, offering both variable and fixed-rate loans (the former for as little as 3% interest per year). So you can borrow on Aave, sell the Tether stablecoin loan on exchanges like Binance for fiat money, and then use the funds to pay off credit card debt, avoiding the compounding interest expense of 20% per year. Check out both this amazing token and the platform when you get a chance.