It's up more than 100% in a week, and investors are clamoring to get a piece of this coffee chain.

Dutch Bros (BROS -0.40%) got off to a scorching-hot start during its first week in the public markets. After initially announcing its IPO price at $23 per share, the stock jumped to more than $50 within only five trading days.

Now, with a week of public trading under the company's belt, let's see why investors are so eager to get their hands on shares of this drive-thru chain -- and whether you should too. 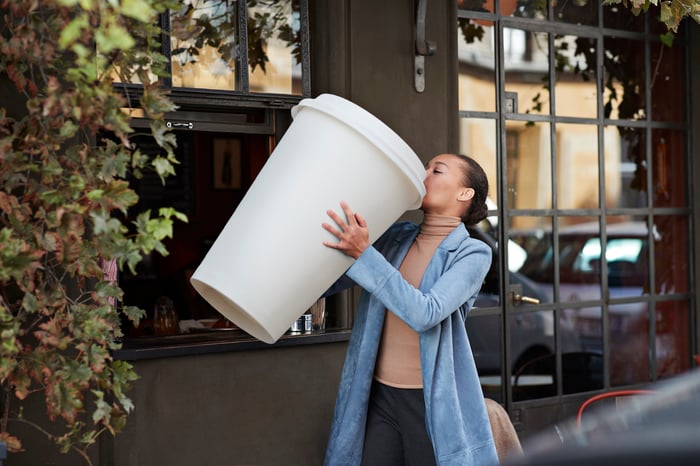 Dutch Bros is an operator and franchisor of drive-thru shops that serve a variety of foods and beverages -- primarily coffee and energy drinks.

Based out of Grants Pass, Oregon, Dutch Bros got its start in 1992 and has since expanded to 471 locations across 11 states. While the company offers many of the traditional types of coffee, it also sells a number of cold energy drinks under the Dutch Bros proprietary "Blue Rebel" brand. These specialty drinks help Dutch Bros drive additional traffic and maintain sales beyond the morning hours and throughout the afternoon.

As for the locations, the actual shop sizes are typically under 1,000 square feet. However, the company tries to lease lot sizes that are larger than 25,000 square feet so that there is enough room to add multiple drive-thru lanes. Most locations also contain a walk-up window and patio as well as a quick-exit lane to reduce congestion and improve customer volume.

As anyone who has ever visited an actual Dutch Bros location probably knows, there are certain characteristics that differentiate the Dutch Bros experience from an ordinary coffee stand.

Driven by the values and culture first instilled by the company's founding brothers -- Dane and Travis Boersma -- Dutch Bros today provides an extremely friendly, fast-paced environment that helps build customer loyalty. From the initial greeting with the order-taking "Runners" to the "Broistas" dancing to blasting music in the drive-up window, there is a positive uniqueness to each visit. The company even stated in its registration filing that "every visit to a Dutch Bros should feel like a celebration."

Underscoring the customer loyalty that Dutch Bros has been able to generate, the company attracted 1.6 million members to its mobile app within the first two weeks of its launch. By comparison, coffee titan Starbucks (SBUX 0.40%) had 19.3 million rewards members in the U.S. at the end of 2020 despite having 31 times as many store locations.

The power of the company's brand has also shined through during COVID-19 as Dutch Bros was able to deliver its 14th consecutive year of same-store sales growth in 2020 whereas Starbucks saw same-store sales decline by 14% vs. the prior year.

To help maintain this culture, Executive Chairman Travis Boersma even decided in 2008 to stop selling franchise licenses to anybody who wasn't already a part of the Dutch Bros ecosystem. While this may have slowed growth over the short term, it has helped preserve the positive atmosphere that's now synonymous with the Dutch Bros name.

Additionally, this strategy has helped retain existing employees and encouraged them to join the Dutch Bros Leadership Pathway Program and learn the blueprint for operating a store of their own.

Dutch Bros by the numbers

In 2020, Dutch Bros generated $327 million in revenue or just under $700,000 per store on average. While the company has proven its ability to generate positive cash flow in the past, some one-time expenses related to the pandemic bogged down profit margins in 2020.

Store growth has been continuing apace with the number of company-operated locations increasing from 37 to 182 since the start of 2018. Management has identified 250 new locations for shop openings and believes there is long-term potential for 4,000 stores in the United States.

While there is certainly lots to like about the company, investors shouldn't be willing to pay any price. Having just gone public, the company's market cap by my estimates currently stands at roughly $8.8 billion or 22 times its trailing-12-month revenue.

That's a steep multiple -- and while Dutch Bros may well grow into this valuation, the current price investors would be paying leaves very little margin of safety. For that reason, I'll be watching from the sidelines for the time being.