The past three weeks have been volatile ones for the broad market, and they've been downright terrible for Nielsen Holdings (NYSE:NLSN), T-Mobile (NASDAQ:TMUS), and Discovery (NASDAQ:DISC.A) (NASDAQ:DISC.B) (NASDAQ:DISCK) These three stocks are down 30%, 13%, and 67%, respectively, from their most recent peaks, with each name tumbling deeper into multi-week low territory this month. It's been sheer misery for their shareholders.

But forward-thinking investors who can look past the market's current noise know that the time to buy good stocks is when they're down -- the deeper in the red, the better. 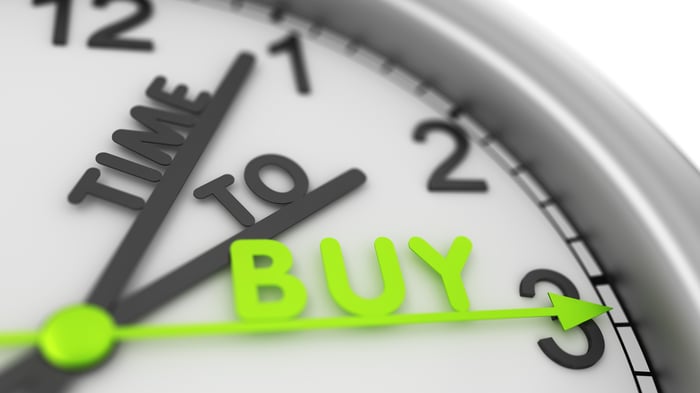 With that as the backdrop, here's a closer look at three companies having a rough month. They're each solid enough in their own way, but the bullish argument is enhanced by the fact each one's shares are deeply discounted.

Yes, this is the same Nielsen that monitors consumers' TV viewing habits so that advertisers can make informed spending decisions when buying ad time from cable television channels and networks. It offers similar services for the benefit of web advertisers.

It's not exactly a stretch to suggest Nielsen wasn't entirely ready for the popularity of streaming video and the continued implosion of traditional cable TV. But the company has made adjustments. For instance, in early 2016 Nielsen launched what it calls "social content ratings" meant to measure the amount of conversation happening on Twitter and Facebook regarding particular television programs. In late 2017, it unveiled a way to keep tabs on smart TV viewers to help omnichannel marketers get more bang for their advertising buck.

However, these are ideas that Nielsen arguably should have put on the table well before they actually were. CEO David Kenny even conceded in a public letter penned earlier this month -- after Nielsen's accreditation for local ratings was suspended for miscounting certain television viewerships last year -- that "we need to move faster in advancing our measurement because the audience itself is moving faster." Investors were already sensing this and other problems and began selling Nielsen shares in earnest in May, ultimately sending the stock down more than 30%.

The thing is, the much-needed overhaul looks like it's finally materializing. Kenny promised in his letter to (among other things) "enable true comparability across all platforms and deduplicate audiences." Last week he started to make good on that promise, partnering with PubMatic to facilitate the purchase of omnichannel ad inventory using consumer-specific data like purchasing habits, intent, and more. Earlier this week the company unveiled an ad-impression measurement initiative that's more in line with how advertisers now buy ad inventory.

There's more repair work to be done, but Nielsen Holdings' recent drama has also served as a wake-up call even if the market doesn't see it yet.

It's tough to compete against established players and familiar names like AT&T (NYSE:T) and Verizon. Never say never, however. Even as saturated as the U.S. wireless market is, T-Mobile connected 1.3 million (net) new postpaid devices last quarter, which is more than AT&T or Verizon can say. Clearly, the company is doing something right.

Don't be surprised to see more of this leading growth going forward. Beginning in mid-October, T-Mobile and Metro by T-Mobile service will be offered at more than 2,300 Walmart stores as well as via Walmart.com, more than doubling the company's presence in brick-and-mortar locales. The expanded footprint is expected to be a draw for rural customers, in particular, looking to plug into T-Mobile's 5G network, which is "the country's fastest and most reliable" ... at least according to T-Mobile.

Investors haven't been impressed by these initiatives. Rather, the market's been discouraged by last month's cyberattack that exposed personal and sensitive data regarding nearly 50 million T-Mobile customers. This data breach, in fact, is what prompted the steep sell-off that got rolling in mid-August.

Trouble is, these sellers have taken the matter much too far. Even after factoring in the impact of the recent cybersecurity misstep, the analyst community still rates T-mobile as a strong buy, and still sports a consensus price target of just over $171 per share. That's nearly 31% higher than the stock's current price near $131.

Finally, add Discovery to your list of stocks to buy now and not later.

Discovery is the media name planning on buying WarnerMedia from AT&T. The deal was announced in May and rekindled a sell-off in place since April, driving shares to the 10-month low they just hit on Tuesday. The market seemingly doubts that combining this respectable-but-not-riveting cable television brand with a film and streaming powerhouse -- Warner is the name behind HBO Max -- is the best possible fit for either outfit in a world where entertainment has become a commodity.

The fact is, however, the entity that will be called Warner Bros. Discovery has a lot of potent tools to work with to create a powerful, all-encompassing platform.

Take HBO Max as an example. It's still only a fraction of the size and age of Netflix. But it's already impressed consumers in a big way. In a recent survey performed by Whip Media, 80% of respondents said they were satisfied or very satisfied with the nascent streaming service, topping Netflix's satisfaction score.

Discovery is quietly hitting its own home runs outside of the traditional cable television business as well. As of the end of June, it was serving 17 million of its own streaming customers with a less splashy platform like Discovery+. That's up from around 11 million as of the end of last year, and an incredible figure for an organization that only recently even began to take streaming seriously. Moreover, CFO Gunnar Wiedenfels recently pointed out that the ad-supported version of Discovery+ actually generates more per-user revenue than the ad-free subscription version does. It's a subtle nod to the idea that Discovery can survive the viewer attrition linked to cord-cutting.

The point is, while we still don't know exactly what things will look like after the acquisition, the company's got plenty of great options for bundling Discovery+ and HBO Max.