Samuel Colt's venerable company is getting a new lease on life under European ownership.

Major names in the U.S. firearms industry, including Smith & Wesson Brands (SWBI 1.98%) and Sturm, Ruger & Company (RGR 1.11%) could soon have significant new competition. Czech gun manufacturer Česká zbrojovka Group (CZGZ.F 1.22%), or CZG, is gearing up for a strong push into the U.S. after acquiring Colt.

CZG is now much better positioned to compete for law enforcement and military firearms contracts in the U.S., along with expanded civilian firearm sales. Aiming to double its revenue to $1 billion or more, it looks like competition will be ramping up for this industry. 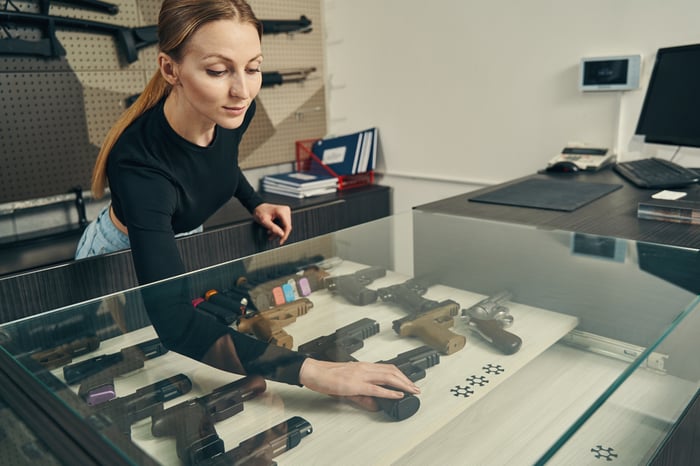 Firearms purchases seem to be slowing after 2020's frenzy with sales growth for Smith & Wesson dipping to low double-digits in the fiscal 2022 first quarter after several periods of triple-digit growth. Earlier this month, firearms companies saw their stock prices rise after the Biden administration's pick for ATF chief, David Chipman, failed to secure the support needed to cement his nomination. However, those small gains weren't nearly enough to offset the steady decline shares have seen since June as investors respond to the news of an industry slowdown.

But sales are still growing despite the slowdown. Ammunition manufacturer Ammo reported solid second-quarter results in late August too. Both firearm and ammunition prices remain somewhat elevated due to continued strong demand intersecting with supply bottlenecks, though the price inflation has eased since 2020 and even early 2021.

While it has sold Czech-made firearms in the U.S. for years, including hunting rifles, semi-automatic pistols, and sporting rifles such as its civilian semi-auto version of the CZ Bren 2, CZG bought out Colt's Manufacturing Company in early 2021. Colt, founded in the mid-19th century by the famous Samuel Colt, has had a long, checkered history, including many changes of ownership and multiple bankruptcies. It does, however, make several iconic firearms and has supplied the U.S. Army with multiple generations of the M-16 select-fire rifle platform, including the current M4 carbine. CZG launched its IPO last October, using the proceeds to buy out Colt in a deal that totaled $220 million in cash, plus approximately one million shares of CZG stock.

In an interview with firearms website TFB (TheFirearmsBlog), CZG's president Lubomír Kovařík noted how the Colt acquisition provides a major expansion to the Czech company's factory capacity. "CZG will gain an additional production capacity and expand its customer network in North America and other countries," he said. He also pointed out how "[t]hrough Colt, CZG will become a supplier to Mil/LE customers and armed forces in the United States, including [the] U.S. Army." He views the companies as synergistic with Colt having superior manufacturing and supply chain assets, while CZG brings top-notch research and development to the combined business.

Under U.S. law, only companies manufacturing guns in the U.S. can compete for American military contracts. Owning Colt will allow CZG to enter its firearms in the U.S. military procurement competitions. Colt lost a major contract with the American military in 2015, but half of its 2020 revenue still came from military and law enforcement sales, according to Reuters.

Czech analysts at Fio Banka predict CZG's police and military sales in the U.S. will jump from 10% of U.S. sales to 50% thanks to the possibility of Colt contracts with the U.S. Army and other branches of the armed forces. CZG says the combined annual revenue of CZG and Colt total about $570 million, but it aims to expand this figure to more than $1 billion by 2025.

And the company is generating strong growth. Fiscal 2021 first-quarter revenue jumped 64% year over year, while EBITDA increased 117%. Net profits for the quarter beat analysts' predictions by about 12% as well. To top it all off, CZG pays an annual dividend yielding about 1.6%, while its payout ratio sits at a very manageable 26%.

CZG's plans to reach more than $1 billion in sales in just four years will still be a challenge for the company. Czech analyst Pavel Ryska from J&T Banka told Reuters he believes the target could be achieved if "the U.S. civilian demand remains robust and keeps rising, and second, CZG adds further production capacity either through its own [capital expenditures] or through additional acquisitions that are well executed."

What this all means for American gumakers' stocks

Neither Smith & Wesson nor Ruger have large-scale contracts with the U.S. Army or any other service branch. CZG's takeover of Colt's military supply role won't affect either company's business in this regard. Increased manufacturing capacity, however, plus the easier potential introduction of new CZG firearms made in the U.S. could win it additional law enforcement and civilian sales.

While CZG's growth projections are dramatic, police and civilian sales are unlikely to significantly move the needle in opposition to Smith & Wesson or Ruger's success, either. CZG is already competing with the two companies in these markets, meaning its effect on the competitive landscape is already priced in. Even with Colt's catalog added to its own, nothing in CZG's lineup is likely to revolutionize its civilian or police sales position.

Thus, the impact of CZG's expansion on American firearms companies should be minimal. However, for those investing in the firearms sector of consumer durables stocks, CZG itself might be worth watching as a bullish choice if it ever applies for and attains listing on the NYSE or Nasdaq.