Emerging markets are a massive opportunity for growth in e-commerce and digital payments. Make sure you consider how to gain exposure to these trends.

The global value of the retail market will hit an estimated $25 trillion in 2021, but just $4.9 trillion, roughly 20% of it, will be e-commerce sales. Retail is gradually moving online, and emerging markets could be an enormous investment opportunity as they follow developed countries online.

Investors could do well to consider adding some exposure to their portfolios, and these three international stocks could do just the trick.

Merchants want to do business in emerging markets, but it isn't easy because so many payment methods exist. Emerging markets are very fragmented; each country has its currencies, banks, credit card providers, etc. It's complicated for a merchant like Amazon to process and manage all of these small, moving pieces in the global payment system. 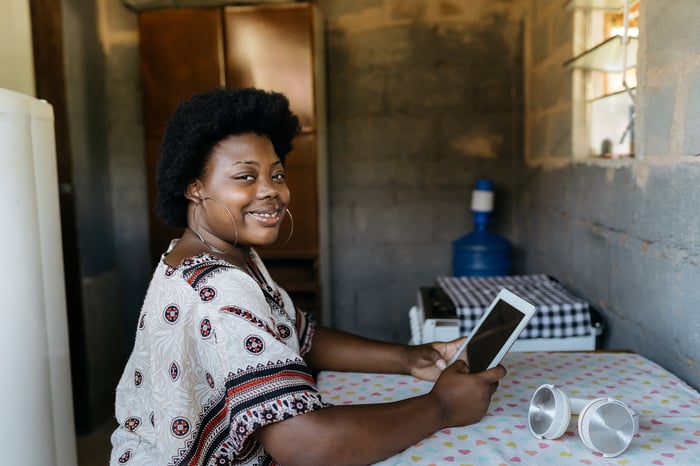 DLocal Limited (DLO -0.95%) is an "all-in-one" payments platform that enables payments to be received and sent between merchants and consumers in emerging markets like Latin America, Africa, and Asia, all in local currency. So, for example, a company like Uber, based in the United States, could send a payment to a driver in Bangladesh, depositing the payment in the driver's local currency and into the driver's local bank account using DLocal's platform.

DLocal's software has been immensely popular. The platform has attracted several big-name customers, including Amazon, Uber, Nike, Wix, and more than 300 others. The company reported its 2021 second-quarter earnings, its first report since its IPO in June.

It recorded $59 million in revenue, a 186% year-over-year increase. The company's net revenue retention rate, a figure that shows how much customers are increasing their spending on the platform, was 196% for the quarter, a very high figure indicating that DLocal's services offer compelling value to its customers.

The company estimates that its addressable market is worth more than $1 trillion, so given its payment volume of $2.1 billion for the first six months of 2021, we are very early in DLocal's potential growth.

The digitization of Latin America is still happening. At the end of 2020, market research service eMarketer estimated that Latin America would be the world's fastest-growing e-commerce region in the world this year. While 85% of people in the United States have a smartphone these days, just 69% of those in Latin America have one, which will only increase to 80% by 2025.

E-commerce company MercadoLibre (MELI -0.59%) has operated at the region's heart since its founding in 1999. The company is an e-commerce conglomerate that operates a marketplace, logistics segment, and payments platform. Consumers can buy an item, and MercadoLibre will process the order and payment, and fulfill the order.

The company recently reported its 2021 second-quarter results, and MercadoLibre sold 245 million items, doing companywide revenue of $1.7 billion, a 103% increase over 2020. In context, Q2 2020 was the height of the COVID pandemic, which was a massive catalyst for e-commerce. For the company to grow at 103% compared to this "high bar" shows that MercadoLibre is rapidly growing with strong momentum.

Russia's e-commerce market is very fragmented, despite its large size. With an estimated retail market size of $456 billion, just $41 billion of that is e-commerce, and the country's top three players control less than 30% of that.

Similar to MercadoLibre, Ozon Holdings (OZON -8.15%) is an e-commerce marketplace that also offers fintech services, as well as delivery and logistics. It is investing in developing its order fulfillment network, and by the end of this year, it will have triple the square footage of distribution center space that it had at the end of 2019.

As the company gets larger and takes more orders, it could begin to take increasing market share due to the fragmented nature of Russia's retail landscape. In its 2021 second-quarter earnings, Ozon saw 180% year-over-year order volume growth. Its active customers grew 80% from 2020, and its seller base grew 3.5 times over the same time frame. These leaps in users and order volume show that Ozon's growth strategy is working, and that is justifying its continued fulfillment investments.

The Amazon of Latin America: Is MercadoLibre Stock a Buy Now?
415%