This year, China's leaders have embarked on an aggressive campaign to rein in its technology giants to promote more "common prosperity," in a bid to reverse the wealth inequality rising in China's economy.

Recently, China's two biggest companies, Alibaba (NYSE:BABA) and Tencent (OTC:TCEHY), announced large RMB100 billion ($15.5 billion) social equity funds, aimed at addressing many of Beijing's concerns. These funds are meant to help underdeveloped areas and industries, but with an uncertain financial payoff. While the companies touted both funds as voluntary, the timing and size does seem to indicate that both were the result of pressure from China's Communist Party.

So, should shareholders in these stocks view the new funds as a "theft" of their investment, and should it make them worried about further actions? 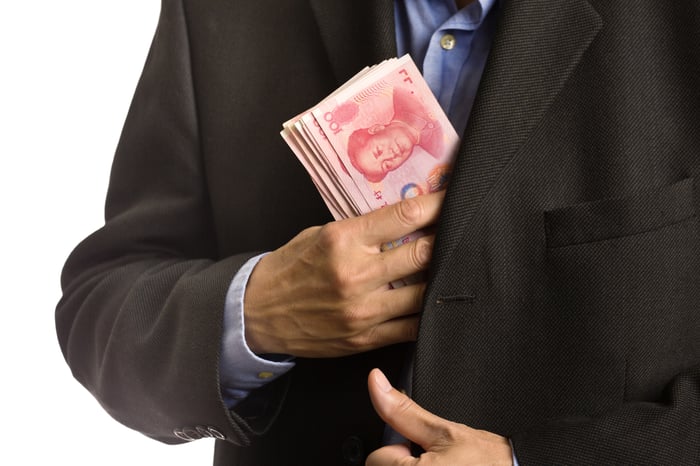 Tencent started the concept in April, and Alibaba followed

At the time, Tencent called the SSV a voluntary extension of its existing 930 program it's had since 2018, in which Tencent would direct its commercial initiatives on products and services that helped society, with the theme of "Tech for Good." However, that corporate strategy, while sound, was still a for-profit enterprise. With the announcement of the SSV, it's unclear whether Tencent would reap any sort of financial benefit, absent a possible tax deduction for charitable giving.

On the first-quarter conference call with analysts, Tencent President Martin Lau answered a question about the benefit for shareholders by speaking in vague generalities:

You know, running a company, building a company is like building a person, right? You know, so, you know, you try to do the right things. And over time, you believe that, you know, good things will happen to that person. You don't really sort of, you know, every step of your way calculate what is the individual gain in some of the movement that you make. So I think, you know, that's sort of, you know, our overall belief when you build up an organization, if you do the right things, good things will happen. On a more granular basis, I would say, you know, if we actually sort of leverage our technology and leverage our products to deliver bigger social good, I think, you know, overall, we'll be better received by our users, or by our customers, by the government, and by our employees.

So basically, there doesn't appear to be any sort of direct financial payoff for these investments, but perhaps an indirect payoff through customer goodwill and marketing.  Of course, the April announcement by Tencent came just one week after regulators fined Alibaba $2.8 billion for violating antimonopoly laws. It is probably unlikely that the timing was a coincidence.

As the summer wore on and the Chinese government continued to submit new and harsher regulations across a wide swath of industries, including Tencent's video game segment, Tencent upped its commitment, announcing in August it was doubling its long-term contribution to RMB100 billion, or about $15.5 billion in total.

In early September, Alibaba responded with its own announcement for its own RMB100 billion program -- notably, a monetary figure that matched Tencent's program exactly. Again, probably not a coincidence. Alibaba's program is focused on similar areas, to help digitize underdeveloped geographies and industries, and to support gig workers and small and medium-sized enterprises.

Should investors bail on these stocks because of the new programs?

China skeptics might see the new social equity programs as a not-so-veiled act of government theft from the shareholders of these companies. Furthermore, the combination of these programs and new regulations is causing a lot of uncertainty and fear that more could be coming.

On the other hand, it's good to keep perspective. These programs will be funded over a number of years, not all at once. Alibaba gave a date for 2025, and Tencent said it would make contributions to its fund once or twice per year. Alibaba has a $400 billion market cap, and Tencent's is $567 billion -- and their stock prices are down 53% and 40%, respectively, from their all-time highs already. So a few billion per year, while less than ideal for shareholders, doesn't seem that onerous.

Furthermore, if one does view these funds as a kind of large "tax," it's not as if Alibaba and Tencent are the only tech giants to be fined billions of dollars. After all, the European Union has fined Alphabet more than $8 billion over the past decade for antimonopoly violations. More generally, governments in recent decades have fined most large tech businesses with wide moats for hundreds of millions, even billions, of dollars. And in the U.S., there is talk about raising the corporate tax rate to pay for needed social welfare programs. So is this really so different?

The answer is both yes and no. While the social equity programs could be the equivalent of other antimonopoly government fines seen in other parts of the world, China's one-party state means these companies have little recourse to challenge regulations or penalties in court. Since the Chinese government has more free rein to pass regulations when and how it wants, versus the process in more open societies, that means investors will have to make judgments about what they believe about the goals of the current Chinese Communist Party. Even to many experts, that remains unclear today.

So while the new social equity programs are not in and of themselves a reason to sell these large Chinese tech giants on a financial basis, they do add a higher degree of uncertainty as a result. That means until there is a clear signal that the regulatory campaigns are over, look for Alibaba's and Tencent's multiples to remain compressed.