A big hit from rising interest rates couldn't hold these two stocks back.

Even amid big declines for many of the largest companies in the world, there was some good news for a few select stocks. Positive earnings played a role in driving shares of Thor Industries ( THO -0.01% ) and United Natural Foods ( UNFI -2.52% ) higher. Below, we'll take a closer look at why these little-known companies were able to buck the downward trend on Wall Street early Tuesday.

Driving on without a care

Shares of Thor Industries were higher by more than 9% on Tuesday morning. The manufacturer of recreational vehicles closed its 2021 fiscal year with record results. 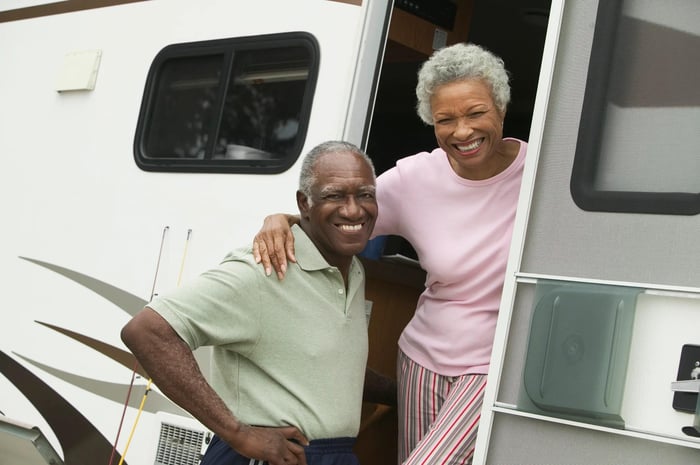 The numbers from Thor Industries were stellar. Net sales for the fourth quarter were up almost 55% year over year, and total annual revenue set all-time highs at more than $12.3 billion. Thor's bottom line saw even better performance, with earnings of $4.12 per share jumping more than 90% from year-earlier levels.

The RV industry has seen explosive growth since the beginning of the COVID-19 pandemic, and those favorable trends continued for Thor. The company reported a backlog of nearly $16.9 billion in recreational vehicles, nearly triple what its corresponding backlog was just 12 months ago. Dealer inventory levels remain historically low, and that's driving robust demand that is exceeding Thor's production output.

Investors have been happy about Thor's strategic efforts lately, including its recent move to acquire RV parts specialist Airxcel and integrate it into Thor's overall business. Given the continuing demand for recreational vehicles, Thor is doing everything it can to make the most of all of its opportunities. So far, it seems to be doing a great job.

United Natural's numbers looked mixed at first glance. Sales for the fourth quarter fell 0.5%, closing a year in which the company's top line grew at a pace of just 1.5%. However, adjusted earnings of $1.18 per share for the quarter were up 11% year over year. Moreover, United Natural closed the year with adjusted earnings of $3.88 per share, up 43% from fiscal 2020's bottom-line numbers.

Yet even with relatively modest expectations for future growth, United Natural shareholders seemed quite pleased with the company's outlook. United Natural sees sales in fiscal 2022 of between $27.8 billion and $28.3 billion, which would represent growth of only about 4% from fiscal 2021 levels. Similarly, adjusted earnings of $3.90 to $4.20 per share would be only about 4% higher than corresponding earnings from the just-ended fiscal year.

United Natural's stock has traded at relatively depressed valuations, with the latest projections putting the share price at just 11 times its forward earnings estimates. In an increasingly expensive stock market, that kind of value is compelling. If it can continue its rebound, United Natural Foods could be a prime example of a solid value stock.