Nike's stock price is down 6% after the company reported fiscal 2022 first-quarter earnings.

The international athletic apparel giant Nike (NKE -2.25%) a few years ago made the decision to shake up its operations and initiated efforts to transform its business. The globally iconic brand shifted its focus to expanding its digital channel in the hopes of connecting more closely with customers.

Late last week, management reported first-quarter fiscal 2022 earnings that suggested the fiscal year was off to a rough start. The stock price fell 6% not long after the report's release. Much of the reason for that was pandemic-related and likely short-term.

But the quarterly report also allowed management to update on its ambitious longer-term transformation efforts. Efforts that management suggests are still achievable.

Nike is setting a higher bar

While Nike's stated goal is to make a more robust connection with its customers, its ongoing digital efforts are also good for the bottom line. Digital sales increase profit margins as Nike keeps the cut that would normally go to wholesaler partners. They also allow for better control of pricing. The timing of this transformation also happens to align with consumers increasingly moving their shopping online.

The success of the digital, direct-to-consumer transformation could partly be what gave management confidence at the end of fiscal 2021 to raise long-run targets for several crucial business metrics. Previously, the company was targeting average revenue growth in the high single-digit percentages by the fiscal year 2025. That target was upgraded to revenue growth in the range of high single digits to low double-digit percentages.

Further, Nike's outlook for average annual earnings growth to be in the high teen percentages by fiscal 2025. Over the previous decade, Nike's average earnings before interest and taxes was 13.2%. Most importantly, Nike's new outlook through 2025 calls for it to increase earnings per share in the mid- to high-teen percentages, up from the previous guidance of mid-teens growth.

But first Nike must get through this coronavirus pandemic. In the first quarter of results since providing those long-term targets, Nike experienced some supply chain disruptions that likely hurt sales. The company's manufacturing facilities in Vietnam and Indonesia were forced to shut down for several weeks, and only the Indonesia facility was reopened for operations. The pause in production was enough for Nike to lower its revenue guidance for the rest of fiscal 2022. Still, management reiterated it believes it can achieve the long-run target it set forth.

The one positive effect of the pandemic for Nike is that it accelerated consumers' shift to shopping online. According to Statista, e-commerce spending by all consumers as a share of overall spending jumped to 18% in 2020, up from 13.6% in 2019. The increase was by far the biggest in the previous four years. Despite the growth, it's important to note that 82% of spending is still done in person. The trend is moving in favor of e-commerce, which will help Nike push its digital, direct-to-consumer agenda.

Nike's digital transformation has meaningfully boosted the company's cash-generating in the last decade (see chart). What's more, the company is targeting better profits in the next several years, which would result in even higher cash flow. 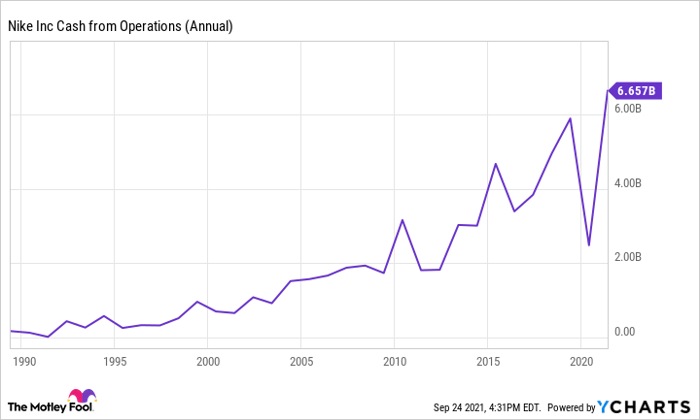 How should investors react to this Nike news?

If you are considering this stock, know that it's still not cheap by historical standards, trading at a price-to-earnings ratio of 42. Further, given that the company faces supply chain bottlenecks that will hurt sales for the rest of the year, its price performance is less likely to improve in the short term. Interested investors need not hurry to buy Nike stock.

That being said, it's an excellent business that aligns itself with changing consumer shopping behavior in a way that could increase long-run profit margins. Investors can place Nike on their list and opportunistically accumulate shares throughout the year as positive news about the supply chain comes out or if the stock price falls further.