Please ensure Javascript is enabled for purposes of website accessibility
Log In Help Join The Motley Fool
Free Article Join Over 1 Million Premium Members And Get More In-Depth Stock Guidance and Research
By Jennifer Saibil – Sep 14, 2021 at 9:45AM

Expect a lot from the athletic apparel giant this year.

Nike (NKE -0.94%) has become more than a sneaker company. It's the largest apparel company in the U.S., and the second-largest in the world, only behind luxury conglomerate LVMH (Louis Vuitton Moet Hennessy), which owns about 75 brands.

As an apparel and footwear company, sales still trail behind the largest U.S. companies, such as Walmart and Apple. However, after a huge recovery from the pandemic, Nike CEO John Donohoe said the company is on track to produce its first $50 billion year in the 2022 fiscal year. Nike reports first quarter earnings, covering the period ending Aug. 31, on Sept. 23. Will it be on its way to a record year? 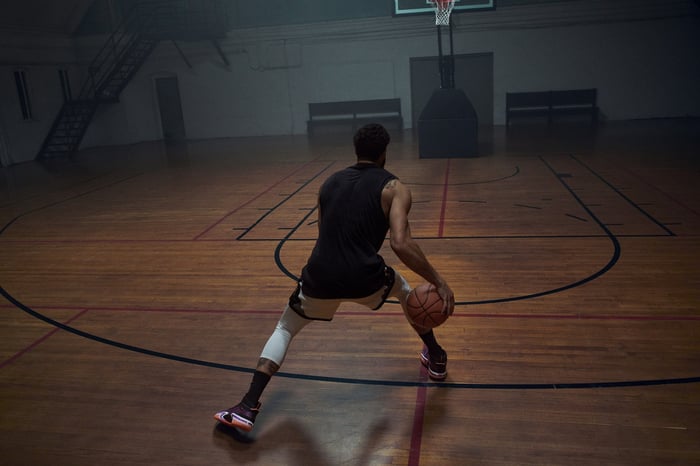 Nike generated a record $44.5 billion in sales in 2021, a 19% increase year-over-year. That was a big comeback from $37 billion in 2020, which was a year-over-year decline. Both Nike direct and wholesale were strong as consumers went back to more frequent shopping.

As for 2022, Nike is guiding for low-double-digit sales growth to surpass the $50 billion mark for the first time. It would need to grow sales at least 12% year over year to achieve this, which is high for an established company like Nike, particularly on top of a huge 2021. But management is confident in the company's continued prospects. Q1 2020 was still a 1% year-over-year decline, so expect high growth in Q1 2022 and a run rate that shows it's on track to reach $50 billion in 2022 sales.

Management revised its longer-term outlook from high-single-digit growth to low-double-digit growth by 2025, along with EPS (earnings per share) growth in the mid-to-high teens and capital expenditures of about 3% of revenue. It also expects digital to account for 50% of sales by that time, and the Nike direct business to account for 40% of sales. This is significant, as the Nike direct channels are more cost-effective, and therefore it expects gross margin to reach into the high 40s by 2025. It was 45.8% in Q4.

Factors in its favor

There are a few key features that make up the massively successful Nike playbook. One is innovation, which drives product development and makes Nike the premium brand that it is. Two is sponsorships, or brand ambassadors, which are integral to the brand's image. Nike typically gets the biggest names in sports, and when it names a product after an athlete, it can become a huge sales driver--just look at what the Jordan "brand" has become. Three is its focus on digital, which is more than just digitally based sales. Nike has created an online community of loyal fans who often get first dibs on product drops and other exclusive content. The SNKRS app grew engagement 80% in Q4, with several livestreamed product drops and other inspiration. 40% of digital sales came from Nike apps, which demonstrates high customer interaction.

It's also combining digital and physical, which is emerging as the new way to shop. It's opening digitally powered storefronts that provide customers with a customized experience as they shop.

Some of its biggest growth drivers right now are women's apparel, the Jordan brand, and international expansion, and that's where it's placing its bets through product development and brand experiences.

One noteworthy metric not in its favor is that China, one of its biggest markets housing 7,000 Nike stores, grew a ho-hum 9% currency neutral in Q4. Management said it was due to "marketplace dynamics," but it's investing in the greater China region where the opportunity remains compelling.

In the 2022 first quarter, investors should keep an eye on progress in Nike direct and China.

A stock you can trust

Nike stock has gained 186% over the past five years vs. 106% for the S&P 500. It pays a dividend that yields 0.68% and is raised annually. There's no shaking its current dominance in athletic apparel, and its stock should keep rewarding investors for years to come as the company breaks through the $50 billion mark and beyond.