The biotech stock was part of a larger Wall Street sell-off.

Omeros didn't have any big news that would have affected its stock price this month. Its last real news was its second-quarter earnings report that came out on Aug. 9, which showed the biotech company reporting $28.8 million of revenue, up 37% year over year, and a net income loss of $28.6 million, compared to a loss of $35.1 million in the same period in 2020. 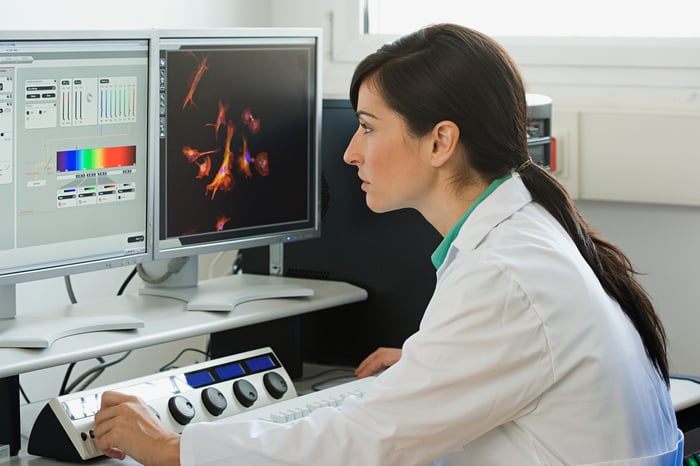 While that news didn't wow investors by itself, it wasn't that negative, as a lot of biotechs aren't yet profitable. However, there were bigger market trends at play that drove the biotech sector down by more than 6% over the month.

Investors tend to get conservative when the market falls, and September was the worst month in a decade, with the Dow Jones Industrial Average, S&P 500, and Nasdaq all showing losses of more than 4%.

Omeros shareholders are waiting to see what happens this month. The biotech company said in its second-quarter earnings report that it expects to hear from the Food and Drug Administration (FDA) by Oct. 17 about the Biologics License Application (BLA) regarding narsoplimab (OMS721) to treat hematopoietic stem cell transplantation (HSCT)-associated thrombotic microangiopathy (TA-TMA). The condition, which carries a high mortality factor, is a complication of HSCT that causes damage to small blood vessels inside crucial organs -- most often the kidneys and brain.

Narsoplimab is also in a phase 3 trial regarding safety and efficacy to treat immunogloblulin A (IgA) nephropathy, a chronic kidney disease; and it's in a phase 2 trial to treat several conditions affecting kidneys: IgA nephropathy; lupus nephritis, when the immune system attacks the kidneys in patients with lupus; membranous nephropathy, when small blood cells in the kidneys become damaged and thickened; and in complement component 3, when the glomeruli, the small capillary networks that filter the blood in the kidneys, become damaged. Narsoplimab is the only drug to receive Breakthrough Therapy designation for hematopoietic stem cell transplantation-associated thrombotic microangiopathy. It also has Orphan Drug designations from the FDA and the European Medicines Agency.

A BLA approval would be a big deal for the company. While Omeros has a fairly large pipeline, its only revenue comes from its only marketed therapy, Omidria, a solution used to prevent miosis (a contraction of the pupil) during cataract surgery and to reduce postoperative pain.