The theme park resort opened 50 years ago on Friday, but Thursday was also a pretty big deal.

Walt Disney's (DIS -0.15%) iconic Florida theme park resort turns 50 on Friday morning, and like a kid who can't wait for the cake cutting the House of Mouse opened a few presents early. Disney World had a couple of significant announcements on Thursday, a day before kicking off an 18-month celebration.

These three developments will get lost in the whirlwind of official openings of new rides, attractions, and nighttime shows on Friday. Let's take a moment to appreciate what these three seemingly throwaway announcements on Thursday will mean for the world's largest theme park operator. 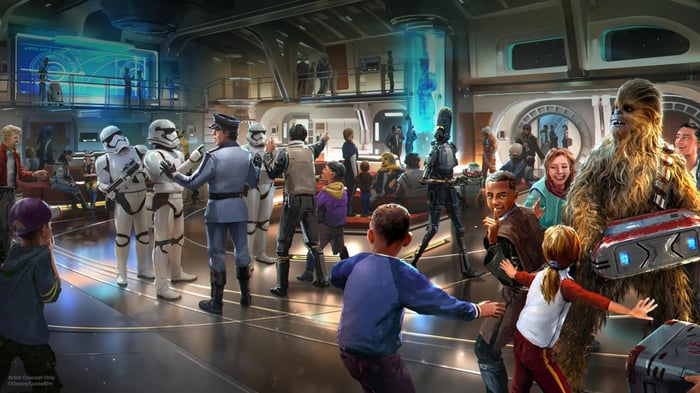 Out of this world

Guardians of the Galaxy: Cosmic Rewind will be a big addition to Epcot when it greets white-knuckled thrill seekers next year. It will be the park's first roller coaster. Every major theme park in Central Florida -- including Disney's three other gated attractions -- has one.

Billed as the first "storycoaster," the ride will shuttle guests through a family-friendly adventure, rotating along the way to heighten the scenic pieces. It's an indoor coaster, an important distinction given Florida's stormy weather but also a smart way to keep Epcot's vibe in check.

The high-end Star Wars-themed hotel experience is fashioned as a two-night expedition into outer space. There will be immersive experiences throughout the stay, with a big price tag to match. The two-night stay starts at $4,809 plus tax for a party of two. Disney will start booking the experience on Oct. 28, and despite the stiff price it should sell briskly at first.

The two space-themed additions will pull entirely different levers for Disney World next year. Cosmic Rewind won't directly increase revenue, but it will draw visitors to Disney World. Galactic Starcruiser will raise the bar for what a lodging experience can cost at the world's most visited theme park resort.

Disney has you by the wrist

MagicBand+ was the third major announcement on Thursday. Disney World park goers have been strapping on MagicBand bracelets for the past eight years. The wristbands contain chips that help identify guests as they enter the park, replace the now defunct FastPass lines, and even allow guests staying on-site to pay for purchases or enter their rooms.

The new MagicBand+ -- which, like Cosmic Rewind and Galactic Starcruiser, won't be available until next year -- offers some new bells and whistles. Enhanced with color-changing lights, haptic vibrations, and gesture recognition, MagicBand+ will interact with nighttime show features and the 50 golden character statues that have gone up across the four parks in celebrating the resort's golden anniversary.

The gesture recognition will come in handy for new games and adventures throughout the resort that will be possible with the new MagicBand+. The new wrist huggers will naturally cost more than the old ones, and it will be easier to push upgrade cycles by adding more features in the coming years. MagicBand+ should also increase engagement, a big deal now that Disney has optimized per-capita spending with premium add-ons that will roll out later this year.

Friday will be a big day for the travel and tourism stocks bellwether. In retrospect, Thursday will be seen as a pretty important day, too.