The lending platform provider's business is gaining momentum as it signs up more clients.

Shares of Upstart (UPST -7.23%) soared by 38.1% in September, according to data provided by S&P Global Market Intelligence.

This surge means that shares of the artificial intelligence-driven lending platform have risen by more than sevenfold year to date. 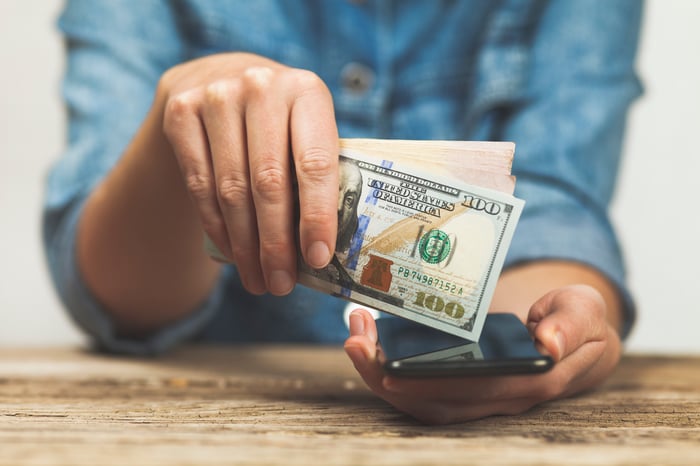 Upstart has been on an impressive growth streak over the last two years as it's scaled its business to help banks originate more loans. Its proprietary AI-driven lending model helps to connect borrowers with banks and increase access to credit for a wide swath of consumers. For its fiscal 2021 second quarter, the number of loans approved hit 287,000, up from just 41,000 two years ago. Conversion rate, measured as the number of loans transacted as a proportion of the enquiries received, hit a high of 24% from just 11% eight quarters ago. Transaction volume has also risen more than fivefold from $486 million to $2.8 billion over the same period.

This increased activity has done wonders for Upstart's financial numbers. For the quarter, the company reported a 14-fold increase in revenue to $187.3 million while reporting net income of $37.3 million, reversing a loss of $6.2 million incurred in the same period last year. Operating and free cash flow have also turned positive for the first six months of the year.

The company remains optimistic for the rest of 2021 and projects that revenue could hit around $750 million, more than triple the $228.6 million earned last year. It recently signed up Water and Power Community Credit Union as a partner to provide increased access to loans for its customers. WSFS Bank (WSFS -6.20%) has also launched its own digital personal loans platform that's powered by Upstart to allow its customers easier access to credit products.

Currently, 71% of Upstart's loans are fully automated, up from just 29% four years ago, illustrating the ease with which customers can get their loans approved. The company has significant room to grow with a total addressable market of $84 billion in the personal loan originations sector.

Recently, Upstart also expanded its auto refinance business from 33 to 47 states covering 95% of the U.S. population. This line of business is gaining traction with the company increasing its dealership footprint and also signing up five bank partners for auto loans. If this venture is successful, it will significantly increase Upstart's total addressable market to $635 billion, more than seven times its original opportunity.