Even as most stocks fell, this group of companies did quite well. Find out why.

Wall Street resumed a steep move downward on Monday, with Friday's one-day break in the downtrend proving to be only a momentary pause. Investors seem nervous about things like inflation, government gridlock in Washington, and geopolitical and macroeconomic issues around the world. As of just after noon EDT, the Dow Jones Industrial Average (^DJI -1.40%) was down 365 points to 33,961. The S&P 500 (^GSPC -1.79%) had fallen 61 points to 4,296, and the Nasdaq Composite (^IXIC) had lost 330 points to 14,237.

Yet even on a rough day, there are usually some stocks that do well. On Monday, it was the energy stocks that stood out from the crowd, posting strong gains. Below, we'll look at why energy did so well and what it says about the prospects for the broader economy going forward.

A big day in the oil patch

The energy sector fared far better than most of the rest of the stock market. The SPDR Select Sector Energy ETF (XLE -2.97%), which includes energy companies from every subsector of the industry, climbed more than 2% today, easily outpacing the rest of its sector exchange-traded fund peers. The SPDR S&P Oil & Gas Exploration & Production ETF (XOP -4.64%), which focuses more narrowly on companies that search and drill for oil and natural gas, saw gains approaching 3% at midday Monday. 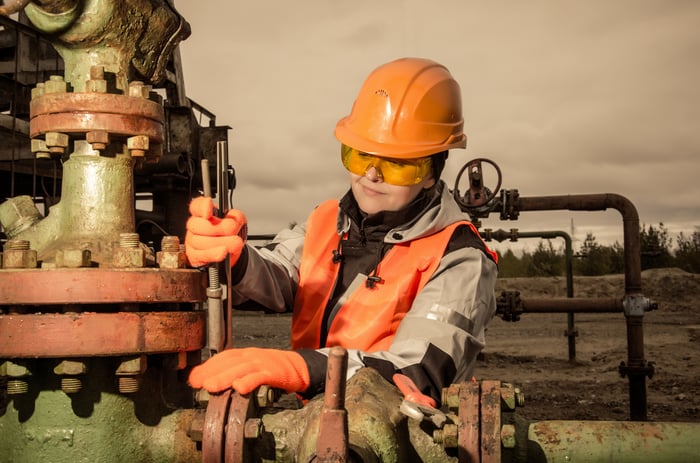 The obvious explanation comes from the commodity markets. Oil prices for West Texas Intermediate crude were up nearly $2 per barrel on Monday, approaching the $78 level. Brent crude on global markets saw even higher prices, with a 3% gain to $81.40 per barrel. Natural gas futures were up more than 5% on the day, coming closer to the $6 per million British thermal unit mark.

Prices of distilled energy products also climbed sharply. Both unleaded gasoline and heating oil prices were up more than a nickel per gallon on Monday, continuing their recent strength. Combined with rising natural gas, that points to a potentially more expensive winter ahead, even with relatively mild weather so far this autumn.

Predictably, you could find many energy companies among the top performers. Earthstone Energy (ESTE -5.79%) and Gran Tierra Energy (GTE) weighed in with double-digit percentage gains, but well-known companies like Range Resources (RRC -6.04%) and Callon Petroleum (CPE -4.27%) weren't far behind with gains of 7% to 8%. Larger players like Devon Energy (DVN -2.79%) and Williams Companies (WMB -2.26%) settled for rises closer to 5% to 6%.

Yet one part of the energy space fared poorly. Typically, rising energy prices would spur solar stocks higher, but that definitely wasn't the case on Monday. Giants like SunPower (SPWR -3.14%) and JinkoSolar Holding (JKS -5.28%) were down 5% to 8%, and microinverter specialist Enphase Energy (ENPH -0.05%) lost nearly 6% at midday.

The problem with solar companies these days is that they're falling prey to the same shortages that are affecting other industries. In particular, Enphase and other key players rely on semiconductor chips for their products, and supply chain issues have hampered production and held back growth even in the face of solid demand.

What's particularly interesting about energy stocks doing well is that strength in oil prices assumes that the global economy will remain robust. Yet the drop in the stock market suggests that won't be the case. That inconsistency is likely to resolve itself at some point -- and that could cause energy prices to start falling if the stock market really does signal a larger pullback in the near future.

This Solar Stock Just Got Even Brighter

Nothing's Holding These 2 Growth Stocks Back From Big Gains Wednesday

Are Stock Markets Headed for Record Highs -- or a Crash?

The Nasdaq Is Plunging, But These 2 Stocks Are Positively Glowing