Please ensure Javascript is enabled for purposes of website accessibility
Log In Help Join The Motley Fool
Free Article Join Over 1 Million Premium Members And Get More In-Depth Stock Guidance and Research
By Howard Smith – Oct 4, 2021 at 11:55AM

Tesla sales on Nio's home turf have been growing.

Shares of electric vehicle makers were trading mixed on Monday morning after Tesla (TSLA -0.19%) released its third-quarter production and delivery results. One EV maker taking a hit is growing Chinese EV company Nio (NIO -3.69%). As of 11 a.m. EDT today, Nio shares were down 5.3%, just off the lows of the morning.

Nio released its September and third-quarter 2021 EV delivery data on Friday, and its quarterly deliveries exceeded the internal guidance that it had revised lower on Sept. 1 due to supply chain constraints. But while Nio did double its deliveries in the third quarter versus the prior-year period, some of its competitors accelerated growth even faster, amplifying the increasing competition in China. 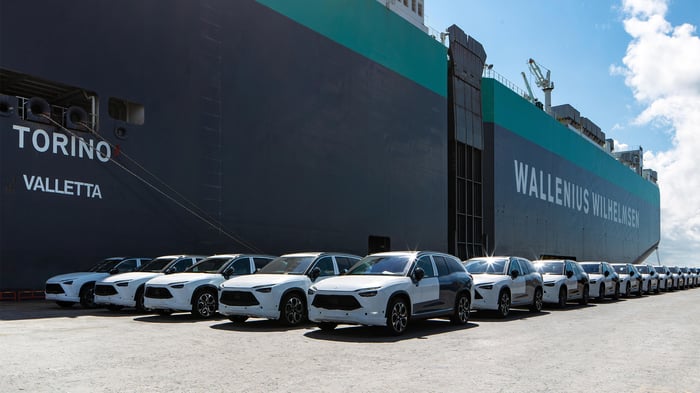 Nio ES8 electric SUVs waiting to be loaded onto a ship for export to Norway. Image source: Nio.

Chinese competitors XPeng and BYD both reported even faster growth than Nio. XPeng tripled quarterly sales year over year, and BYD, in which famed investor Warren Buffett has a stake, said sales of its new energy vehicles more than tripled in the nine months through September compared to the same 2020 period, as reported by Forbes.

Nio delivered more than 24,000 vehicles in the third quarter, but that pales in comparison to the more than 240,000 Teslas delivered globally in that same period. And Tesla's local sales of its EVs made at its Shanghai factory have been growing. That data isn't out yet for September, but in August the company sold almost 13,000 within China, more than twice as many as Nio delivered that month, and more than the 10,628 that Nio delivered in September.

But Nio is expanding abroad with a team now active in Norway and sales planned for Germany next year. With competition increasing, investors might be selling some Nio stock to diversify in the sector. The good news for EV investors is that overall demand is increasing as evidenced by growing sales across the board. Nio is a long-term growth story for investors. As its growth continues, aggressive investors may want to consider a dip in shares as a buying opportunity.

Why Nio Stock Is Rebounding After an Early Morning Crash
360%