It might not dramatically affect the underlying business of either company, but competitor Blue Origin just announced a much beloved passenger for its next mission.

With technology stocks down more than 2% today, it's not surprising that shares of a pre-revenue high-growth company like Virgin Galactic (SPCE -1.15%) would also be down. But Virgin Galactic shares are significantly underperforming the market today. As of 2 p.m. EDT on Monday, shares were near the day's lows, down about 5%.

Privately held competitor Blue Origin stole the spotlight today by announcing that popular actor William Shatner of Star Trek fame will be going to space in real life on the next Blue Origin launch mission. True to form, Shatner provided a statement that would resonate with his fans, saying: "I've heard about space for a long time now. I'm taking the opportunity to see it for myself. What a miracle." 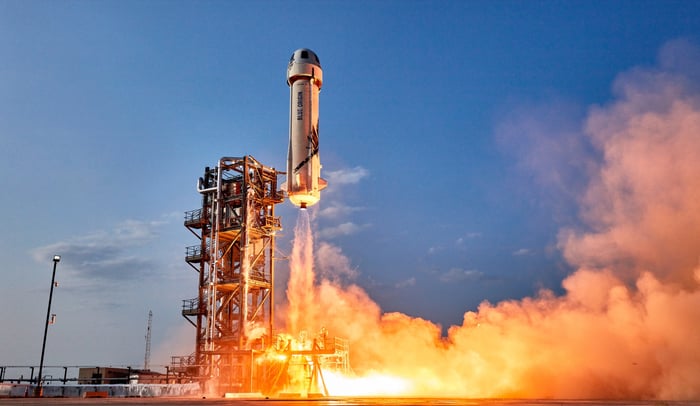 Just as Virgin Galactic founder Sir Richard Branson was aboard his company's first crewed flight, Blue Origin founder Jeff Bezos was aboard the initial New Shepard flight mission to the edge of space in late July. Shatner will be one of four passengers along with Audrey Powers, the Blue Origin vice president of mission and flight operations, on the New Shepard NS-18 flight scheduled to launch Oct. 12.

While the Blue Origin flight will likely now get much more publicity, that could be good for both companies in the long run. Last week, Virgin Galactic received word that it was again cleared to fly after the Federal Aviation Administration (FAA) completed a probe into what it dubbed a "mishap" on the last flight, which included Branson. The spacecraft briefly veered off its flight path during its ascent, which put it outside of air traffic control clearance for that time period.

The FAA accepted the company's corrective action plans, and it is now cleared to fly its first commercial mission for the Italian Air Force, planned to launch as early as mid-October. That's more important news than a famous passenger on a competing space tourist flight. But for now, Captain Kirk is getting all the attention.