Credit Suisse points to Carnival earning 50% more than anyone else thinks possible in 2023.

Shares of Carnival Corporation (CCL 0.30%) (CUK -0.34%) jumped 2.2% through 11 a.m. EDT Tuesday after analysts at investment bank Credit Suisse raised their price target on the cruise line stock to $41 a share.

No huge surprise there, because Carnival stock costs less than $26 today. 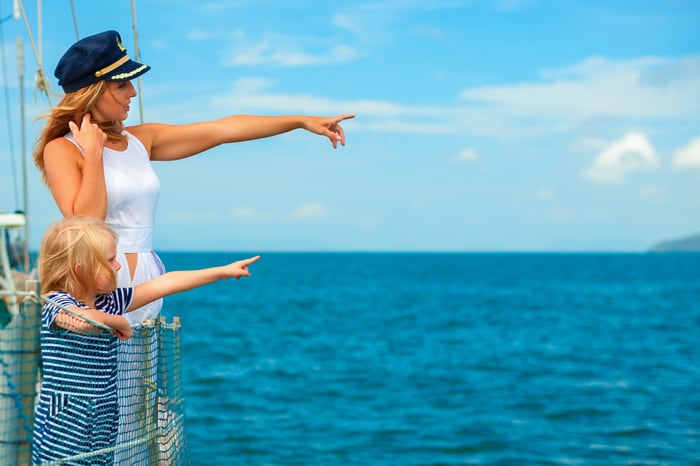 Credit Suisse premises its higher price target on details gleaned from Carnival's third-quarter earnings report last month. In that report, Carnival said it lost $2.8 billion in the fiscal third quarter, but generated positive cash flow, and forecast that fiscal year 2022 (or at least the back half of it) will be superior to the results seen in 2019.

Taking its cue from management, therefore, CS focused its note on 2022. As StreetInsider.com reports, the banker believes that in the second half of 2022, ticket pricing at Carnival will be roughly flat against 2019 (i.e., no need to offer discounts to entice passengers aboard). Furthermore, CS believes that Carnival's profits "should theoretically improve" as it moves from taking payment in the form of "credits" against old voyages that were canceled, to cash money over time, as "passengers with credits book earlier."

Granted, costs will rise in 2022, pulling profits back down again. Long-term, however, the analyst believes that because "a majority of this increase is due to a paused fleet lowering the denominator in which to spread fixed costs, and restart expenses, neither of which are structural in nature," rising costs early in the restart are nothing to get upset about.

Heading into 2023, furthermore, Credit Suisse predicts lower costs than Carnival incurred in 2019, before the pandemic. Pricing will continue to improve as a consequence of the company removing 19 lower-priced ships from its fleet, causing average ticket prices to rise.

As a result, the banker believes patient investors can expect to see Carnival earning as much as $3 a share by 2023. Granted, that's 50% more than the $2 per share that most analysts predict -- but $3 is also 31% less than the $4.33 per share that Carnival earned in 2019, according to data from S&P Global Market Intelligence.

So is it worth paying a $41 price target that is 13.7 times earnings two years from now for 31% less profit than Carnival earned two years ago -- back when the stock averaged a forward P/E of 14.1, and back when Carnival carried a much smaller debt load?

I have my doubts about that, but Credit Suisse seems convinced, and gives Carnival stock an outperform rating.