Morgan Stanley thinks investors are underestimating competition on the horizon.

Shares of Gogo (GOGO 0.10%) fell 10% on Wednesday morning after the aviation internet services provider was downgraded to underweight at Morgan Stanley.

Gogo shares have staged a nice post-pandemic recovery over the past year. The stock is up 50% over the past 12 months thanks in part to a September update that provided a rosy outlook for future cash flow. 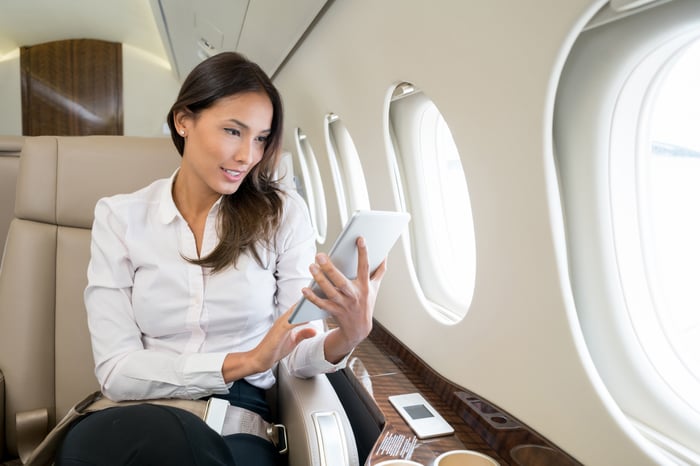 But not everyone is optimistic. On Wednesday, Morgan Stanley analyst Landon Park downgraded Gogo to underweight from equal weight, though he did up the bank's price target by $1 to $14. Park wrote that although Gogo is benefiting from a rise in private jet travel and enjoys a dominant market presence, he expects that to change in the coming months as competitor SmartSky launches service.

Park doesn't believe coming competition not just from SmartSky but also from satellite operators is priced into the stock. The analyst expects growth to decelerate in the years to come, which could have a negative impact on the stock.

Gogo is selling into a large and growing market, which is likely to lead to more competition. Park is right to be cautious, but existing investors should not panic.

The company enjoys a large installed base that provides some near-term security. The battleground will be new jet sales, and with General Dynamics' Gulfstream unit and Textron's Cessna both predicting an uptick in business jet orders in the years to come there is a lot of opportunity for both Gogo and newcomers to win business. Gogo with its existing reputation, and its investment in 5G to speed its network, is well positioned to win at least some of that new business.

Park is correct in saying challenges lie ahead, and given how far Gogo shares have run this might not be the same growth stock it has been over the next 12 months. But don't expect Gogo's business to fall from the sky.

Why Shares of Gogo Are Higher Today