Cryptocurrencies have had a big year in 2021, from the explosion of the meme-inspired cryptocurrency Dogecoin to the adoption of Bitcoin as legal tender in El Salvador. While there has been huge growth in the market with the rise of now 6,500 cryptocurrencies, the crypto evolution is still in its early stages, presenting investors with plenty of opportunities to invest.

Here are three cryptocurrencies that can grow your portfolio.

With a nearly $407 billion market cap, Ethereum (CRYPTO:ETH) is the second-largest cryptocurrency behind Bitcoin, and probably the second most well-known cryptocurrency as well. Ethereum is the name of the decentralized blockchain technology network that maintains a digital ledger of transactions, while the actual cryptocurrency tokens that run on top of the network are called Ether tokens. Like most cryptocurrencies, Ethereum can be used to transmit money to anyone, which is great for those without bank accounts. But the main draw for investors is that applications can be programmed on the network -- as can smart contracts -- which are essentially contracts that are automatically carried out in a very secure manner and cannot be altered after they have been executed and certain conditions are met. For instance, a landlord could create a smart contract with one of her tenants, where the rent is automatically transferred to the landlord on a set day each month as long as all of the conditions in the contract are met.

The other exciting part about Ethereum is that developers are currently hard at work on a set of big upgrades for the network called Ethereum 2.0. The upgrades, which have been underway for years, will transition Ethereum from a proof-of-work concept that uses the energy-intensive practice of mining new Ethereum tokens, to a proof-of-stake concept where Ethereum holders use their current tokens to create new ones. Not only will the upgrades make Ethereum more sustainable, but it will make the network faster and able to process as many as 100,000 transactions per second. Ethereum has already surpassed $4,000 per token at one point this year and can go much higher, especially with the successful integration of Ethereum 2.0. 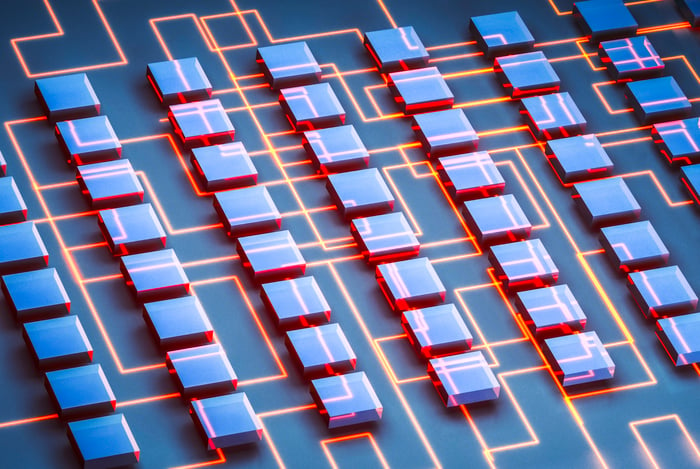 If you like the idea of investing in Ethereum, you will probably see a similar opportunity in Cardano (CRYPTO:ADA). Developed by a co-founder of Ethereum, Cardano also provides opportunities for programmers to build apps and smart contracts on its blockchain technology and recently launched the capability to the public. Cardano is already operating with a proof-of-stake model and there is talk that Cardano could eventually have the ability to process 1 million transactions per second. Even after its big upgrade, Ethereum will only be able to process 100,000 transactions per second.

While Cardano sounds superior to Ethereum, it can be tough to catch those first movers, especially in the cryptocurrency world. There are many cryptocurrencies that are faster and have better technology than Bitcoin, but as the pioneer of blockchain technology, Bitcoin will likely always maintain its position as the No. 1 cryptocurrency. It could be a similar story for the dynamic between Ethereum and Cardano, but with Cardano only having a roughly $71 billion market cap, there is certainly plenty of room for growth in the coming years.

Lesser known than Ethereum and Cardano, Theta Token (CRYPTO:THETA) is different from many existing cryptocurrencies out there. Rather than focusing on payments, Theta is a blockchain network that enables peer-to-peer video streaming. Video hosting today is still often of poor quality and can be quite expensive for companies because they need to purchase lots of servers to handle all of the demand from viewers. The Theta network believes it can greatly improve video streaming in a cost-effective way by allowing people to share excess bandwidth from their own personal devices when they are not using them. Users that share their bandwidth to the network can earn money through tokens. Theta.tv is the platform that enables people to stream a wide variety of content and earn money from sharing bandwidth. Trading around $6.36 per token, the price of Theta has struggled a bit in recent months, but has traded as high as $14 in April and was at less than $1 just one year ago.

I like this one in particular because it seems like it has unique real-world utility in its ability to advance video streaming.