These highly profitable businesses may not stay at these reduced valuations for long.

Since the start of September, the S&P 500 has fallen by more than 2.5%. And many top growth stocks have been falling along with the index. Although it may be a bit unnerving to buy into this dip, doing so could pay off over the long term, especially when the businesses you invest in are growing at incredible rates.

If you have $5,000 to invest, consider buying shares of Veeva Systems (VEEV -8.63%) and Adobe (ADBE -0.75%). They haven't just been falling since last month, they've crashed by more than 12%. But here's why you'll still want to consider adding them to your portfolio anyway. 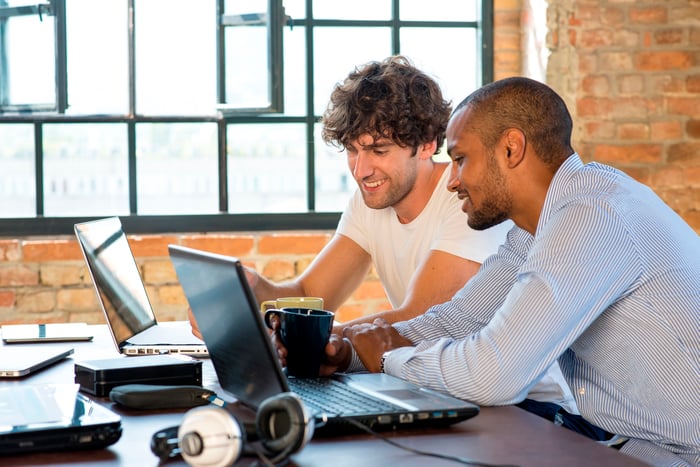 Health tech company Veeva Systems enables healthcare businesses to make the most of technology and help improve their processes. Digital transformation is big business, and according to researchers at Quince Market Insights, the global market for that will increase at a compound annual growth rate (CAGR) of 15.6% until 2030, when it will be worth nearly $590 million.

Veeva can play a significant role in the digitization of healthcare. In addition to managing data through Veeva Vault, customers can also run analytics on that information to help make better decisions using the company's Veeva Commercial Cloud software.

There's a lot of growth on the horizon for Veeva, and it's already generating some impressive numbers. In its latest quarterly results, reported on Sept. 1, sales of $455.6 million for the period ending July 31 grew by 29% year over year while net income of $108.9 million rose by 16%. It reported similar numbers in the previous period, where revenue again increased by 29%, but that time, net income jumped 33%.

Those impressive numbers make Veeva one of the best healthcare stocks out there right now. Veeva's stock hasn't been this low in months, so growth investors may not want to wait too long to get in before the rally that's likely to come given the company's outlook.

Another company that can benefit from greater digitalization is Adobe. The business's software products aren't constrained to just one industry, however, and that potentially makes it a more compelling buy than Veeva for the long term. From its photo-editing software, Photoshop, to PDF viewer Acrobat, the company's products can be used in a variety of industries.

The company's growth rate is slightly lower than Veeva's, but it's still incredibly impressive given how much more revenue Adobe brings in. For the period ending Sept. 3, Adobe reported record revenue of $3.9 billion, which grew at a rate of 22% year over year. A quarter earlier, its sales of $3.8 billion were 23% higher than in the prior-year period.

Like Veeva, the company generates recurring subscription revenue for its products, and that helps it post some impressive margins. Over the trailing 12 months, Adobe has netted more than 38% of its revenue as profit -- Veeva is a bit lower at 26%, but that's still a remarkably high profit margin.

Shares of Adobe are the lowest they've been since June. And while the September sell-off has been steep, investors may be hoping for too much if they expect Adobe's stock to get anywhere near its 52-week low of $420.78 (that would be another 26% decline from where it is today). Even buying at today's price can net you a good return; several analysts have set price targets of more than $670 for the stock. If Adobe's stock were to reach those levels, that would be a return of around 18%. And analyst price targets normally cover a period of no longer than two years: Over the longer term, Adobe could net you an even better return on your investment.