Cancer drug Libtayo could receive FDA approval for its fourth indication in January.

Regeneron Pharmaceuticals (REGN 1.67%) and Sanofi (SNY 1.10%) announced last month that the U.S. Food and Drug Administration (FDA) had accepted their jointly developed cancer drug, Libtayo, for priority review as a treatment for patients with recurrent or metastatic cervical cancer whose disease continued to worsen during or after chemotherapy treatment. The agency is planning to deliver its decision on Libtayo's fourth cancer indication by Jan. 30.

So let's take a look at how effective Libtayo appears to be in treating cervical cancer, and how much of a boost that FDA approval could give to Regeneron. 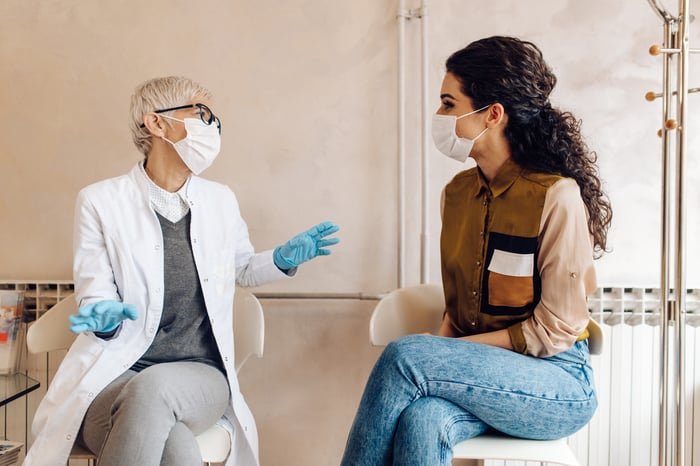 Recurrent cancers are those which return after a period when the cancer was in remission or couldn't be detected any longer. They may manifest in the same organ as the prior cancer, or elsewhere in the body. Metastatic cancers occur when a cancer spreads from where it initially started to other, more distant parts of the body.

Fortunately, the next generation of treatments should boost survival rates for women diagnosed with metastatic cervical cancer. Regeneron and Sanofi's phase 3 clinical trials for Libtayo produced such strong results in treating patients with recurrent or metastatic cervical cancer that the study's independent data monitoring committee unanimously recommended an early conclusion of the trial in March. In other words, the efficacy data for Libtayo was so overwhelming that the committee believed it could safely and more quickly be provided to cervical cancer patients and oncologists in need of better treatments.

The randomized phase 3 trial, which compared recurrent or metastatic cervical cancer patients receiving Libtayo every three weeks to those who received commonly used chemotherapy treatments, found that Libtayo significantly reduced their risk of death. Patients undergoing treatment with Libtayo survived a median of 12 months, which was significantly higher than the median survival period of 8.5 months for those receiving chemotherapy. This produced a massive 31% reduction in the risk of death in patients receiving Libtayo over the duration of the clinical trial.

The American Cancer Society estimates that over 14,000 cases of invasive or metastatic cervical cancer will be diagnosed in the U.S. this year and that about 4,000 women will succumb to the disease this year.

I estimate that Libtayo's addressable market of patients in the U.S. is around 20,000. That's actually a somewhat conservative calculation, considering that there are tens of thousands of cervical cancer survivors in the U.S. and the recurrence rate of the disease is about 35% for those diagnosed with invasive cervical cancer.

Based on Libtayo's annual list price of nearly $160,000, the drug's U.S. market would be around $2.5 billion annually, factoring in insurance adjustments.

Since Libtayo's clinical results are first-in-class for cervical cancer compared to the top-selling oncology drug in the world from Merck (MRK -0.79%), Keytruda, I believe that it can realistically capture a 20% market share. This gives it potential annual sales of around $500 million for this indication alone.

Given that Libtayo has generated $218 million in total first-half sales for Regeneron this year, adding another $500 million in annual revenue in the U.S. that it doesn't have to split with Sanofi would be more than a doubling of Libtayo's current sales trajectory for this year.

What's next for Libtayo

Regeneron and Sanofi also expect to submit regulatory applications for a Libtayo label expansion in the European Union by the end of this year, which suggests a regulatory approval could come next year.

If it's approved for cervical cancer in the EU, Libtayo's total sales potential for the pharma companies from this indication could come close to $1 billion, with Regeneron raking in around $750 million annually.

Buy-and-hold investors should consider buying Regeneron based on the fact that it is trading at nine times estimated forward earnings. This is well below the average forward P/E ratio of nearly 17 for the healthcare sector and in line with other value names like Merck and Pfizer (PFE 1.21%), which trade at 14 and 10 times forward sales, respectively.

Why Regeneron Pharmaceuticals Stock Is Crushing It Today
371%