Please ensure Javascript is enabled for purposes of website accessibility
Log In Help Join The Motley Fool
Free Article Join Over 1 Million Premium Members And Get More In-Depth Stock Guidance and Research
By Keith Speights – Oct 11, 2021 at 6:01AM

This company is an up-and-comer in a fast-growing market.

Small. Unproven. Subject to manipulation. Those are just some of the potential downsides to investing in penny stocks. At one point, the term referred only to stocks that traded for less than $1 per share. Now, though, penny stocks include those with share prices of under $5.

But some penny stocks have fewer drawbacks. They can also have significant upside potential that even top analysts recognize. Here's a penny stock that Wall Street thinks will nearly double within 12 months. 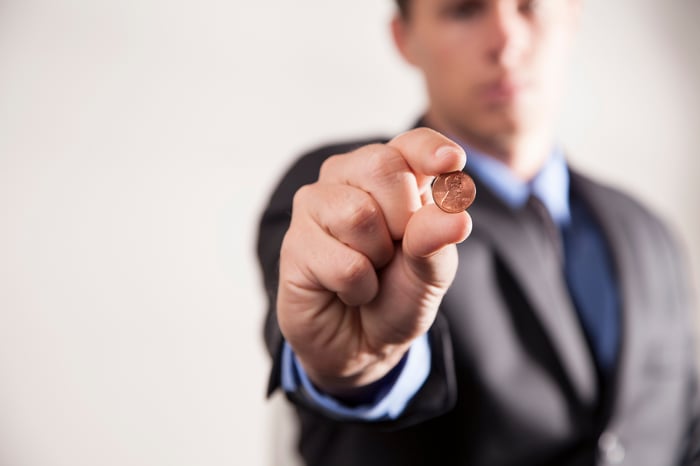 High hopes for this cannabis stock

Multi-state cannabis operator Jushi Holdings (JUSHF 1.57%) stock trades at close to $4 per share. The consensus 12-month price target among analysts surveyed by Refinitiv for the cannabis stock reflects a premium of more than 90% to the current share price.

Granted, there are only three analysts in Refinitiv's mix. There isn't a broad consensus on Jushi. One of the analysts isn't as upbeat on the company's prospects as the others. Cantor Fitzgerald's Pablo Zuanic thinks Jushi is basically trading near its fair value right now.

However, two analysts recommend Jushi as strong buys. The most optimistic analyst thinks that Jushi could soar nearly 150% higher.

Jushi has delivered a solid return of over 70% since beginning trading in mid-2019. So far this year, though, the stock hasn't delivered on analysts' high hopes with shares tumbling more than 30%.

Why are some analysts still so bullish about Jushi? For one thing, they like the company's growth trajectory.

Jushi reported revenue in the second quarter of $47.7 million, up nearly 15% sequentially and almost 220% year over year. The company even posted a profit of $4.8 million, although a $21.1 million gain on fair value derivative liabilities boosted the bottom line.

This growth is being driven largely by Jushi's retail cannabis stores in California, Illinois, Pennsylvania, and Virginia. The company has also benefited from greater operating activity at its cannabis cultivation and processing facilities in Nevada and Pennsylvania.

Jushi's long-term prospects are also appealing. The company expects to generate revenue of between $375 million and $425 million next year, up 74% year over year at the midpoint of its guidance. This projected revenue translates to a forward price-to-sales multiple for Jushi of only 1.7. That gives Jushi one of the most attractive valuations in the cannabis industry.

There's also a wild card that could really improve Jushi's fortunes. As long as marijuana remains illegal at the federal level in the U.S., Jushi can't list its shares on a major U.S. stock exchange. However, if efforts to change federal laws are successful, Jushi and other marijuana stocks would likely skyrocket.

There are a few downsides to Jushi, though. The company still has a way to go to attain consistent profitability that doesn't require smoke and mirrors. It could have to raise additional capital through stock offerings that dilute the value of existing shares.

Jushi lowered its full-year 2021 guidance for adjusted earnings before interest, taxes, depreciation, and amortization (EBITDA). One key reason behind this reduced guidance was that Virginia's medical cannabis market is growing slower than expected.

Investors also shouldn't bank on federal cannabis reform. While the prospects are better than in the past, any legislative efforts could die in the Senate.

However, it still wouldn't be surprising if Jushi's shares do come close to doubling over the next 12 months as analysts expect. And the company's prospects should get even better in 2024 when Virginia's adult-use recreational cannabis market opens.

Many penny stocks aren't great picks. Jushi could very well be an exception.