Third-quarter results gave investors a good proxy for how other banks might perform in Q3, and how the economy fared as well.

JPMorgan Chase (JPM -0.85%), America's largest bank by assets, kicked off another widely anticipated earnings season, as investors and analysts were interested to see how banks and the economy fared in the third quarter. The coronavirus' delta variant caused parts of the country to once again take caution, with cases and hospitalizations on the rise. However, the economy also continued to recover as people adapted to life with COVID-19 and as vaccines likely muted its impact. 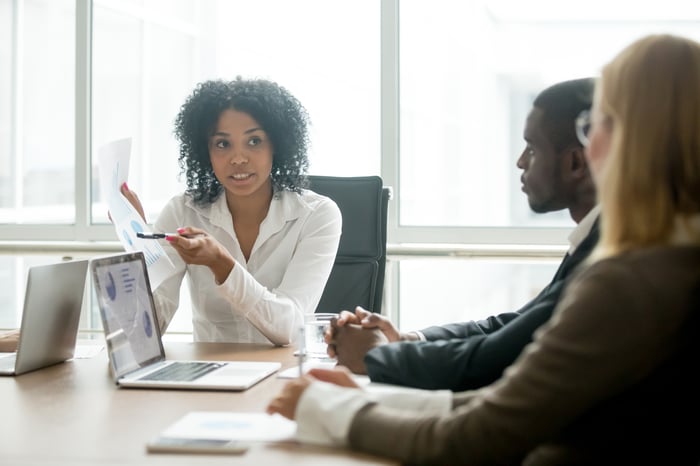 Investors weren't expecting anything special in regard to loan growth, and they didn't get any surprises. Average loan balances at JPMorgan grew 2% from the second quarter and were flat on a period-end basis.

But the good news is that the bank noted spending on debit and credit is up 26% compared to 2019 levels, and management believes credit card repayment rates have stabilized. CFO Jeremy Barnum said there are signs that credit card loan growth will eventually pick up, such as strong consumer spending levels, but it's still a question of whether that spend translates into card loan growth. Credit card loan balances in Q3 rose 1% from the end of the second quarter and 4% from Q2 in terms of average card balances. Barnum said data within the bank shows that the customers who typically contribute to credit card loan growth are starting to spend the savings built up from the pandemic at a faster clip, suggesting they could be getting closer to taking on debt again.

On the commercial side, there was even less activity on the loan front, which has been the norm all year. Loan balances in the commercial bank were flat on a period-end basis and down on an average basis in Q3. Loan balances declined in middle-market banking and budged up very slightly in corporate client and commercial real estate lending. Barnum said the continued struggle in commercial and industrial loan growth has to do with supply chain issues, although smaller corporate lenders that don't have access to capital markets have been a little more active. Barnum called the pipelines in commercial real estate "robust," but didn't provide any loan growth guidance for 2022.

After reporting great credit quality in the first half of the year, JPMorgan saw even better credit quality in Q3. The bank's net charge-off rate of total loans -- which is debt unlikely to be collected, a good indicator of actual loan losses -- dropped to just 0.21%, which Barnum called the lowest the bank has seen in recent history. As a result of continued strong credit, the bank released $2.1 billion of capital previously set aside for loan losses back into earnings as profit.

Additionally, JPMorgan's total reserves for loan losses are still $2 billion above where they were on Jan. 1, 2020, prior to the pandemic. There could still be more releases, largely because of continued strength in the credit card portfolio.

Net charge-offs in the bank's credit card portfolio dropped from 2.24% in the second quarter to 1.39% at the end of Q3, which is very low. Management guided for the full-year 2021 net charge-off rate to be about 2%, and JPMorgan has set aside enough reserves to cover losses equivalent to more than 8% of its credit card loan book.

The corporate and investment banking (CIB) division served as a buoy for JPMorgan during the pandemic, generating enough revenue to power through all of the loan loss provisions the bank had to set aside to prepare for potential loan losses. And despite some normalization, the division continued to generate very strong results. CIB in Q3 produced nearly $5.6 billion of net income on total revenue of nearly $12.4 billion. Investment banking revenue of more than $3 billion in the quarter was up 45% year over year, while the division also saw good performances from equity markets and securities services.