Investors have a golden opportunity to buy a fast-growing company on the cheap.

Share prices of Applied Materials (AMAT 2.40%) have pulled back nearly 8% since the stock's rating was cut from buy to neutral by research firm New Street Research toward the end of September. While New Street reaffirmed its $140 price target on the stock, it cited the lack of near-term catalysts as the reason for the downgrade.

This seems to have dented investor confidence in Applied Materials stock, which has beaten the broader market handsomely so far in 2021 thanks to a string of impressive quarterly results driven by the growing demand for semiconductor manufacturing equipment. 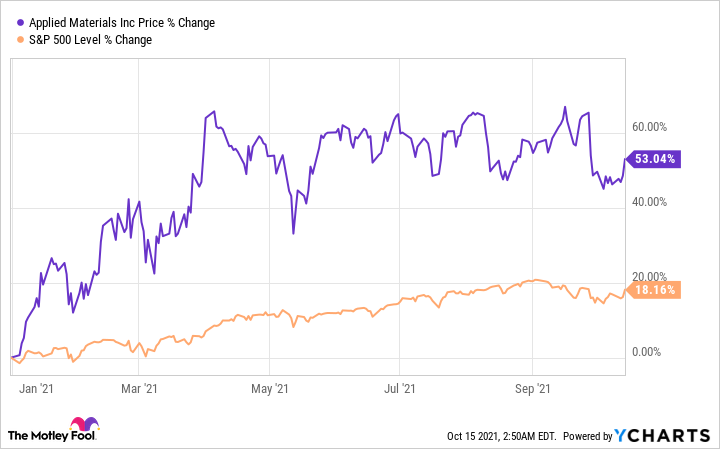 However, investors shouldn't forget that Applied Materials' prospects haven't changed overnight, and it is still one of the best ways to take advantage of the growing demand for semiconductors across the globe. Let's look at the reasons why buying Applied Materials on its latest dip could turn out to be a smart investment decision in the long run.

The world is facing a shortage of semiconductors, as demand for chips has increased substantially since last year. For instance, Apple is facing a component shortage that's restricting the production of the iPhone 13, while Nvidia and Advanced Micro Devices have been struggling since last year to make enough graphics cards to meet the demand from gamers. Sony and Microsoft, meanwhile, have been unable to satisfy the demand for their latest gaming consoles because of the chip shortage.

Not surprisingly, semiconductor foundries have sprung into action and are spending billions of dollars to upgrade and expand their production lines. As a result, semiconductor capital spending is expected to increase 13% in 2021 to $127 billion as per a third-party estimate.

Industry association SEMI estimates that the higher capital spending will lead to a massive jump in the sales of semiconductor manufacturing equipment this year. Around $95 billion worth of semiconductor manufacturing equipment is expected to be sold in 2021, which would be a 34% increase over last year. In 2022, SEMI forecasts that spending on chip fabrication equipment could hit $100 billion.

So the industry Applied Materials operates in is showing no signs of a slowdown in the near term. What's more, the world's thirst for chips isn't going to slow down even in the long run given the increase in semiconductor content across a wide range of applications.

So the next $400 billion in semiconductor revenue is going to arrive at a much quicker pace. That should pave the way for consistent growth at Applied Materials, as foundries will need to expand their production capacities to meet the booming demand.

The boom in semiconductor investments has translated into terrific top- and bottom-line growth at Applied Materials. The company's fiscal 2021 third-quarter revenue for the three months ending on Aug. 1, 2021, jumped 41% year over year to a record $6.2 billion. Applied Materials also reported record adjusted earnings of $1.90 per share for the quarter, up 79% over the prior-year period.

The company's outlook for $6.33 billion in revenue this quarter would translate into a 35% year-over-year increase from $4.69 billion in the fourth quarter of fiscal 2020. This makes it clear that Applied Materials isn't going to run out of steam in the near term. More importantly, the company's long-term forecast points toward sustained growth.

Applied Materials trades at 22 times trailing earnings and sports a forward earnings multiple of just 16. These multiples tell us that the stock is trading at a nice discount to the S&P 500, which has a price-to-earnings ratio of 30. That's why investors looking to buy a fast-growing company at a cheap valuation should consider taking advantage of Applied Materials' latest drop and buy more shares to benefit from the semiconductor boom.

A Soft Landing May Be Coming: 3 Semiconductor Stocks That Could Soar