China's antitrust regulators recently fined Meituan (OTC:MPNG.Y), one of the country's largest on-demand delivery companies, 3.44 billion yuan ($533 million) -- or 3% of its domestic revenue from 2020 -- following a closely watched probe that started in April.

The investigation mainly focused on Meituan's use of exclusive deals to prevent its merchants from using other delivery services. The company will need to end those exclusive partnerships, return 1.29 billion yuan ($200 million) in merchant deposit fees related to those deals, improve safety standards for its delivery workers, and submit compliance reports over the next three years. 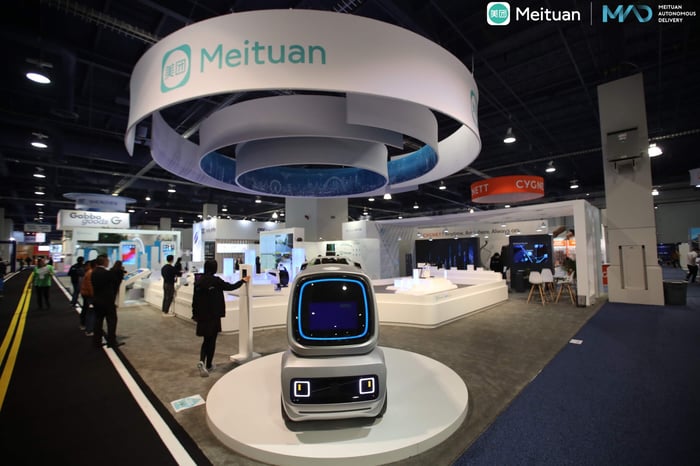 That sounds like a big setback for Meituan, but its stock rallied sharply after the announcement on Oct. 7. A wide range of other Chinese tech stocks also rallied alongside Meituan as investors digested the news.

Let's see why Meituan's probe attracted so much attention, why its resolution lifted other Chinese tech stocks, and whether or not investors should consider Meituan to be a viable investment.

Why were investors following Meituan's probe?

The Meituan probe by China's State Administration for Market Regulation (SAMR) was the agency's highest-profile crackdown since its probe of Alibaba (NYSE:BABA) last year. That investigation ended this April with a record fine of 18 billion yuan ($2.79 billion), which was based on 4% of Alibaba's domestic revenue in 2019.

All that pressure, along with escalating threats in the U.S. to delist shares of Chinese companies that don't comply with tighter auditing rules within three years, have depressed the share prices and valuations of most Chinese stocks. However, value-seeking investors have also been waiting for those headwinds to wane in order to scoop up some high-growth stocks at low prices.

Why did Meituan's fine spark a rally?

Meituan's stock rallied because the 3% fine on its domestic revenue was lower than the 4% charge on Alibaba's domestic revenue. That one percentage point difference might seem minor, but it convinced some investors that China's antitrust crackdown was cooling off. The conclusion of the probe also cleared the air regarding Meituan's near-term growth.

The conclusion of the probe also followed a series of more positive developments regarding Chinese stocks. Concerns about a potential real estate crisis in China slightly receded, analysts expressed some optimism about thawing U.S.-China relations ahead of the upcoming virtual summit between President Joe Biden and President Xi Jinping, and several major investors -- including Charlie Munger -- loaded up on Chinese tech stocks such as Alibaba.

That shifting market sentiment caused many Chinese stocks to rebound over the past week, but most of the top names -- including Alibaba, JD.com (NASDAQ:JD), Tencent (OTC:TCEHY), and Baidu (NASDAQ:BIDU) — are still down by double-digit percentages for the year.

Should you invest in Meituan?

Meituan's platform enables merchants to provide group discounts for purchases of food, products, and travel-related bookings. It generates most of its revenue from food deliveries, and it fulfills its deliveries through a network of human couriers and autonomous vehicles.

Meituan's revenue rose 18% to 114.79 billion yuan ($17.81 billion) in 2020 as the softness of its in-store, travel, and hotel businesses partly offset the growth of its online delivery services during the pandemic. However, its net profit surged 110% to 4.71 billion yuan ($730 million) as the pandemic's initial impact throttled its overall spending.

Those growth rates seem volatile, but Meituan's stock trades at less than eight times this year's sales -- which makes it much cheaper than other tech stocks with comparable revenue growth.

If you believe the worst is over for Chinese tech stocks, Meituan -- along with Alibaba, JD, and Tencent -- might be great buys. However, I believe investors should wait for clearer signs of a recovery beyond Meituan's lower-than-expected fine to start buying Chinese stocks again.