These three companies are reimagining how products should be sold online -- here's why they will outperform.

With global e-commerce sales set to grow from $4.3 trillion in 2020 to $6.4 trillion in 2024, it is no secret that this trend will continue to create many long-term outperforming stocks that operate in the space. Spread throughout the world, many giant e-commerce players dominate their particular regions and are good bets to continue beating the market.

Thanks to the power of this massive trend, three of my favorite stocks currently not only operate in this sector but are entirely focused on revolutionizing how these sales happen worldwide. Today we will look at each company and see why they all have multibagger potential. 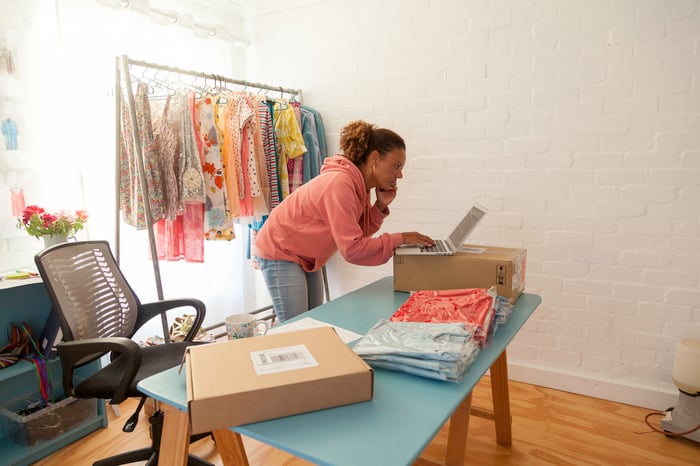 Offering unique, personalized goods, Etsy (ETSY -1.25%) revolutionizes e-commerce by bringing it a human touch. Led by CEO Josh Silverman and his 98% approval rating from his employees on Glassdoor, Etsy boasts a strong 4.5 out of 5-star rating on the company review website, highlighting Etsy's robust culture.

Thanks to the power of this strong culture, Etsy differentiates itself from its giant peers Amazon and eBay. This differentiation creates a loyal community of buyers and sellers looking to find and make less-commoditized products that, in time, will build a strong sense of attachment to the company's brand.

This sense of community is clear to see in Etsy's recent second-quarter earnings report, which showed that it now has over 8 million listing videos on its website, a figure that was up 21% from the previous quarter. Fueled by these videos, the company saw the engagement on its social media channels increase by 700% from the previous quarter. This engagement includes all interactions with the videos and demonstrates the growing mindshare Etsy is accumulating among shoppers.

It has a market capitalization, or company price tag, of $27 billion, and its free cash flow of almost $700 million for the trailing 12 months gives it a price-to-cash flow of 40. Considering the company grew gross merchandise sales 14% year over year for the second quarter, despite facing year-over-year 146% growth comps from 2020, Etsy's high growth potential looks attractively priced.

Providing businesses with a suite of products to enable them to sell across borders, Global-E Online (GLBE -2.31%) is reimagining the process of selling internationally. Whether it is adapting to the local market, processing foreign currency exchanges, providing international logistics, or navigating international tax laws, there are innumerable barriers to begin selling globally. Multiply these problems by over 200 specific countries, each with its complexities, and many companies rule out the idea of going global.

That is where Global-E steps in. With cross-border e-commerce estimated to grow above $700 billion in volume by 2023, according to Forrester Research, the company is beautifully positioned to ride this megatrend. Already having 500-plus merchant partners signed up with the company's cross-border selling services, Global-E aims to become the go-to provider for international expansion.

At the same time, the company has another megatrend working in its favor -- direct-to-consumer, or DTC, sales growth. As many retailers worldwide have scaled back, or are considering scaling back, on their store counts, DTC sales become paramount. Once again, this is where Global-E's end-to-end solutions stand out. Offering localized customizations, including a network of over 20 shipping carriers, the ability to interact in over 25 languages, and 150 payment methods, the company's simple plug-in software solution offers clients unmatched global sales capabilities.

While revenue only accounted for $57 million for the second quarter, its 92% growth rate year over year shows the company is just starting its growth journey. However, contrasting Global-E's market cap of roughly $8 billion with the $700 billion in cross-border e-commerce volume mentioned above, the company's long-term growth story may still be a great value.

Through its unique one-stop shop for entrepreneurs and large businesses alike, Shopify (SHOP -1.97%) is revolutionizing the e-commerce industry by expediting the time between product idea and business creation. As a result, regardless of a company's needs, and no matter its size, there is a Shopify product or service that would support its operations.

Whether it is simplifying an online store's sales, lending money for working capital, or even offering fulfillment and point of sale systems, Shopify's ecosystem is the backbone for many of today's up-and-coming companies. In fact, its partnership with, and 5% ownership stake in, the previously mentioned Global-E lead its international expansion offerings.

This partnership not only strengthens Shopify's international capabilities but demonstrates just how difficult it would be to replicate Global-E's services. In addition to this, the company also has an 8% stake in buy now, pay later company Affirm Holdings. These equity ownership stakes are of particular interest to investors, as they demonstrate the company's multiple avenues for growth potential or optionality.

Having generated just over $2 billion in gross profits over the trailing 12 months and sporting a market cap of $171 billion, Shopify does not look cheap at first glance. However, with $7.7 billion in cash on hand free for additional equity investments, and its gross profit growth of 64% for Q2 year over year, it is easy to imagine Shopify outperforming the market over the next decade.

What the Smartest Investors Know About Etsy Stock
415%