These reliable healthcare companies have a lot to offer investors.

As the famous quote goes, nothing is certain except death and taxes. I'd add to that list the following: If you invest in quality stocks today, you will significantly grow your capital over the next 10 years. As far as increasing the average person's savings, the combination of time and compound interest is practically undefeated.

With that in mind, let's look at two quality companies that will help your portfolio shine over the next decade: Intuitive Surgical (ISRG 1.64%) and Eli Lilly (LLY 0.60%). Both companies have performed better than the broader market recently -- here's why they'll continue to do so. 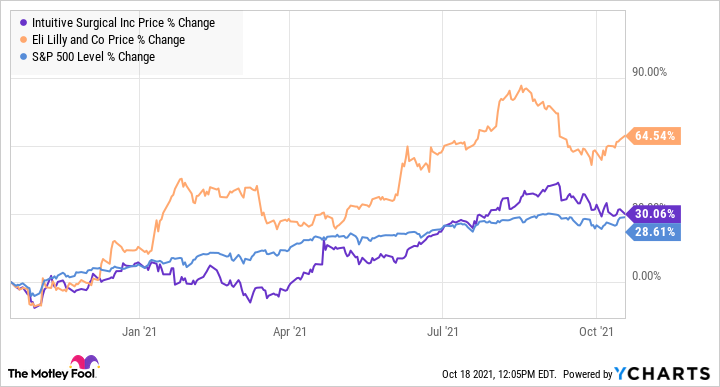 Here are two things that can help a company deliver above-average returns: Leadership in a fast-growing industry and a competitive edge against its peers. Intuitive Surgical has both of those things. In 2020, the healthcare giant held a 79.8% share of the robotic-assisted surgery (RAS) market thanks to its da Vinci robotic surgical system.

This device helps physicians perform minimally invasive surgeries, which result in less bleeding, less pain, and faster recovery time for patients. Partly thanks to these advantages, the RAS market has a bright future ahead. According to some estimates, this space will be worth $16.77 billion in 2031, up from $5.46 billion in 2020.

And while Intuitive Surgical has to contend with increasingly tough competition -- most notably from other healthcare juggernauts such as Medtronic and Johnson & Johnson -- it boasts a strong moat that will protect it against these companies and potential newcomers. First, Intuitive Surgical benefits from a first-mover advantage. The da Vinci system was the first of its kind to be cleared by the U.S. Food and Drug Administration (FDA) back in 2000.

Developing these machines requires years of research and is a capital-intensive task. But that's just the first step. Developers then need to jump through a series of clinical and regulatory hoops, something Intuitive Surgical has already done. 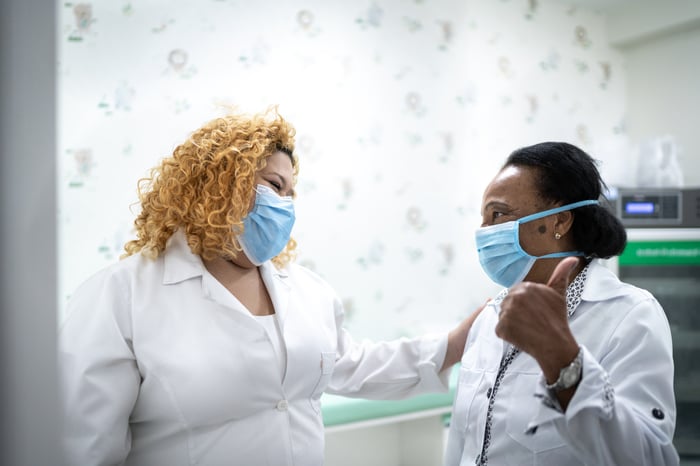 These barriers to entry will protect the company's business. Intuitive Surgical also benefits from high switching costs. The da Vinci system costs anywhere between $500,000 and $2.5 million. That's not to mention the time it takes to train medical staff on the machine, and the instruments and accessories healthcare facilities have to purchase to perform various procedures with it.

These costs are far too high for these facilities to decide to jump ship to a competitor's product. That's why Intuitive Surgical will likely retain the bulk of its clients. There is the worry that the current trajectory of the pandemic could hinder the company's business, but whatever disruption occurs as a result of the outbreak would probably be temporary.

Last year, Intuitive Surgical's revenue dropped by 2.8% to $4.4 billion because of the negative impacts of the pandemic. Other than this one-time glitch, the company revenue has been on an upward trajectory for years -- its annual revenue has nearly tripled in the past 10 years. In the long run, expect Intuitive Surgical to continue soundly beating the market, which makes its stock worth buying today.

We can't choose when we get sick or when we might need life-saving medicines. That's why pharmaceutical companies like Eli Lilly are so important. But several things set this drugmaker apart from most of its peers. First, Eli Lilly is one of the leading insulin manufacturers in the world.

Only Novo Nordisk, Sanofi, and Eli Lilly supply insulin to the U.S. market, and they control 90% of the global market. Eli Lilly comes third in this ranking with a global market share around 23%. The company's entire suite of diabetes products is very strong. These include Trulicity, Humalog, and Jardiance, all of which continue to grow their sales rapidly. The best-selling of the bunch is Trulicity; its sales in the second quarter jumped by 25% year over year to $1.5 billion. Meanwhile, revenue from Humalog increased by 9% year over year to $607.6 million, while sales of Jardiance jumped by 36% to $356.5 million.

That's not to mention Eli Lilly's non-diabetes drugs, including cancer medicine Verzenio and Alimta, and immunosuppressant Taltz, all of which are performing splendidly. In the second quarter, Eli Lilly's revenue from Verzenio soared by 64% year over year to $341.3 million. Sales from Taltz and Alimta grew by 44% and 13%, respectively. Eli Lilly also has several exciting pipeline programs. One of the most promising is Basal insulin-Fc, a once-a-week insulin product for patients with type 2 diabetes.

Those with type 2 diabetes often have to take insulin daily -- so it's not hard to see the potential here. After producing solid results in a phase 2 study, BIF is currently being investigated in a pivotal clinical trial.

Then there's Eli Lilly's donanemab, a potential treatment for Alzheimer's disease. This medicine has also produced promising results in a phase 2 clinical trial. Donanemab would encounter stiff competition if it is approved, since Biogen's competing drug, Aduhelm, was approved earlier this year. But given that 6.2 million people live with Alzheimer's in the U.S., there is enough space here for two (or more) companies.

Moreover, considering the data from Biogen's pair of phase 3 studies for Aduhelm wasn't as conclusive as one might have hoped, the fate of the medicine rests on phase 4 (confirmatory) clinical trials. If it fails to impress in these trials, it could be taken off the market.

In short, Eli Lilly's donanemab, which earned breakthrough designation from the FDA in June, could still make waves in this market. Even if this project fails, the pharmaceutical company boasts several dozen pipeline programs. Label expansions and new approvals will continue bolstering its portfolio. And given Eli Lilly's already strong lineup, the company's future looks bright.