The steep decline in stock price is not a hallucination.

Following a September swoon across the broader market, many cannabis operators found their stock prices tumbling. This included GrowGeneration (GRWG -2.27%), an ancillary cannabis company specializing in accessories such as lighting and hydroponics to support cannabis plant growth.

Unfortunately for GrowGeneration, the real tumble started before September, even though its second-quarter results posted on Aug. 12 highlighted numbers that appeared to show promising growth. Two notations made within the second quarter results and comments from analysts have driven the stock further down, making it a risky play until it can show signs of having hit a bottom. 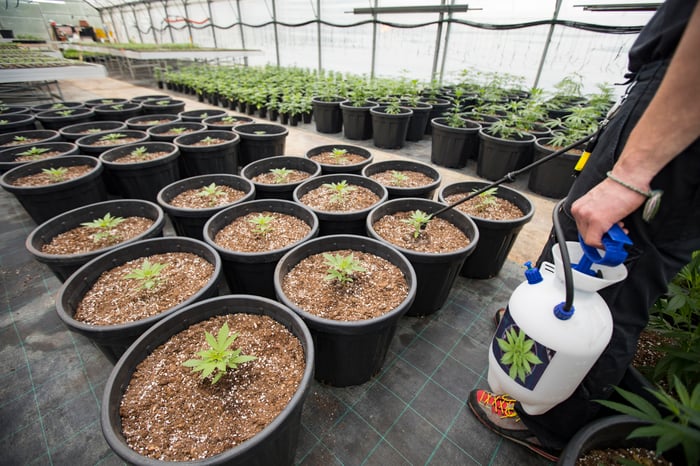 Current numbers are not the problem

As more states legalize medical- and recreational-use cannabis, more companies are expanding their footprints across the U.S. This increases the likelihood that GrowGeneration will see a positive impact on revenue growth, because as more facilities are opened, or expanded for increased capacity, more products will be needed to support the cannabis production that is taking place.

The company's second-quarter earnings report showed signs of that growth. Record revenue came in at $126 million, a 190% quarterly increase on a year-over-year basis, driven by an expansion of 27 new locations during the first half of the year in addition to a 55% increase in e-commerce transactions during the quarter. This helped support a 161% rise in income to $6.7 million for the quarter. These factors were among the primary reasons the company raised its full-year guidance to a projected annual revenue of $455 million to $475 million, from a previous average of $460 million stated during the first-quarter earnings call.

Slowing growth is projected for the second half of the year

But the growth that took place during the first half of the year may not necessarily be duplicated in the second half. After highlighting the purchase agreement entered into with HSG Hydro, which would have given GrowGeneration the third-largest chain of hydroponic garden centers in the U.S., the company recently terminated that agreement. The reason, according to GrowGeneration's CEO Darren Lampert, was "following appropriate due diligence and capital allocation analysis, we decided to mutually terminate the acquisition."

As a result, the company reduced its full-year revenue guidance. GrowGeneration was expecting the purchase of HSG to ultimately contribute $20 million toward annual revenue for 2021, which is now scrapped. Removing that $20 million has resulted in a revised lowered guidance range of $440 million to $452 million in revenue for the year, which was announced on Oct. 13. What's of interest behind these numbers is that although the previous quarter had called for a raised guidance, the new lower number takes the guidance down below the originally stated $460 million average, which was in place prior to the second-quarter earnings call.

Along with a lowered guidance as a result of the purchase agreement termination, the company faces challenges with slowing market growth. On the call, Lampert noted that supply issues in building new stores is causing delays in store openings. Four stores that were expected to open in the late second or early third quarter are now being pushed to the fourth quarter. He also said that a tremendously slowing market in states coming on board along the East Coast, such as New York and New Jersey, is having a negative impact due to lags in licensing. But it's important to note that slowness doesn't mean it won't happen. It simply means that the growth expectation is somewhat delayed.

The company is not alone in acknowledging a slowdown. After the second-quarter earnings report, Stifel analyst W. Andrew Carter lowered his price target on GrowGeneration's stock price to $50 from $67 -- a 25% reduction. Carter reasoned that the 2021 full-year revised guidance represents a new level of uncertainty.

What does the future hold for the stock?

The stock price has been tumbling -- from $67 in February to a recent $22 -- amid a combination of factors, including broader market pressures, slowing growth, and the amount of time it's been since the Biden administration took over, when hype was at a peak with anticipation of the potential for federal legalization of recreational-use cannabis. Some could argue that such a decline opens the door to a buy low scenario. I won't disagree with this. The revenue growth, earnings improvement, and expansion efforts are evidence that the company is moving in the right direction.

Whether or not the stock price has found a bottom yet is what keeps me at bay. I'll steer clear of this one for now until third-quarter results come out around Nov. 14, at which time I'll be looking for more information related to stronger market growth, new store openings, and a potential for increased e-commerce transactions leading to new revenue. Should those results support a positive outlook for the fourth quarter and into 2022, it would make for an intriguing buy low opportunity for investors.

2 Pot Stocks That Could Make You Richer
409%