Please ensure Javascript is enabled for purposes of website accessibility
Free Article Join Over 1 Million Premium Members And Get More In-Depth Stock Guidance and Research
By Parkev Tatevosian - Oct 21, 2021 at 7:15AM

Continued vaccination efforts are helping governments avoid the tough choices about whether businesses should stay open.

The onset of the coronavirus pandemic led governments worldwide to take unprecedented actions in their efforts to slow its spread. Large segments of economies were forced to shut their doors to customers or operate at reduced capacity. The moves hurt revenue at businesses that relied on customers interacting with others in close proximity.

Airbnb ( ABNB -4.19% ) and Walt Disney ( DIS -1.97% ) were two such businesses that took big revenue hits initially because of the pandemic. In addition to government-mandated restrictions, folks were taking more precautions than usual. 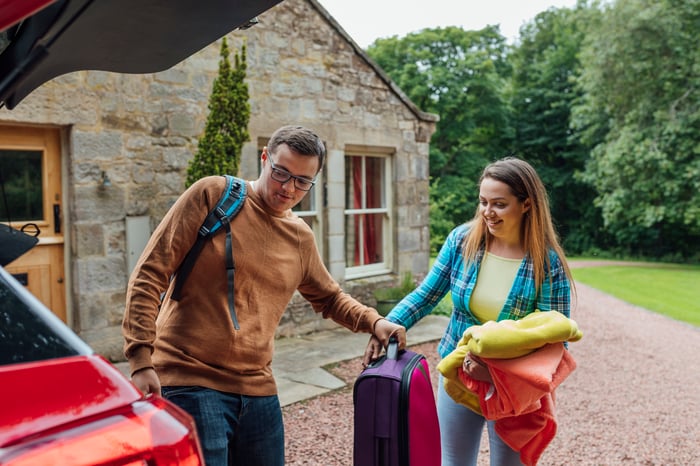 Thankfully, the world is making progress in its efforts to get COVID-19 under control; several effective vaccines have been developed, and nearly 7 billion doses have been administered. The vaccines have allowed governments to reopen segments of their economies that were forced to shut down. For the most part, economies that have emerged out of lockdowns are staying open.

And that makes this a good time for investors to consider buying these two reopening stocks.

1. Airbnb is looking forward to a travel rebound

Airbnb has created a worldwide online marketplace for lodging, mostly as it relates to travel and vacationing. The company saw its revenue decline by 29.7% in fiscal 2020 because of the coronavirus pandemic. There were fewer people who wanted to travel while a deadly virus was in circulation. The trend is reversing, and the company's revenue is recovering as more people get vaccinated. Its recovery is just getting started, and there may be plenty of room to go as the pent-up demand for travel gets released.

Airbnb's business model allows it to quickly and efficiently expand to accommodate boosts in demand. The company does not build or operate properties listed on its platform. Instead, Airbnb attracts hosts to list available rooms or properties on its platform. Airbnb takes a percentage of the revenue transacted between the host and a guest. If Airbnb needs to increase the supply of listings, it tries to incentivize hosts to list more often, it brings on more hosts, or both. Admittedly, it takes some effort to make this work, but certainly not nearly as much effort as constructing a new hotel or resort would require.

Moreover, Airbnb has a long runway for growth. Consider that its peak revenue of $4.8 billion accounts for just a tiny share of the overall hotel and resort market of about $1.47 trillion.

2. Walt Disney is getting back to full strength

Disney theme parks, resorts, and cruise operations felt the brunt of the effects of pandemic lockdowns. These venues rely on bringing thousands of people together in person and often in close proximity. At one point, all of its parks were shut down, generating no revenue while still needing some degree of maintenance. That applied to its hotels, resorts, and cruise ships as well.

Fortunately, all of its theme parks, resorts, and cruise ships are reopened and gaining revenue momentum with each passing month. Indeed, the segment that includes theme parks generated $4.3 billion in revenue in its most recent quarter ended July 3, up from $1 billion in the same quarter last year. What's more, Disney's CEO Bob Chapek said that its U.S. parks are likely to report better results in its next update.

Another part of its business that is recovering with economic reopening is box office revenue. Already, the company has five films (Black Widow, Shang-Chi and the Legend of the Ten Rings, Free Guy, Cruella, and Jungle Cruise) that have each made at least $200 million in international box office receipts in 2021.

Overall, the coronavirus pandemic hurt these two excellent companies, but they are both bouncing back strong. They each have excellent long-term prospects, and this is a good time to consider adding these reopening stocks to your portfolio.