Disney's stock is down in 2021 despite the economic reopening.

When The Walt Disney Company (DIS 0.90%) temporarily shut the turnstiles to its theme parks to help slow the spread of the coronavirus, it was devastating to the business. The parks are a cash-generating engine and are a significant driver of the company's overall revenue and profit.

Fortunately for visitors and investors alike, all of Disney's theme parks are open again. In speaking about customer visiting patterns during a Sept. 21 presentation, Disney CEO Bob Chapek said the two domestic parks are doing better in its ongoing fiscal fourth quarter so far, compared to the third quarter, which ended July 3. This continues momentum from the third quarter, where the segment quadrupled revenue from the same time last year. This news should go a long way to assuage investor concern about slowing attendance as COVID-19 cases continue to rise in some parts of the world. 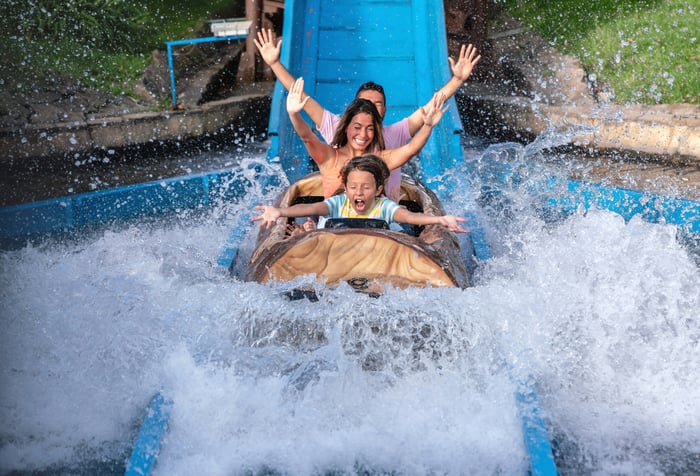 In Disney's fiscal 2019, theme parks raked in $26 billion in revenue and $6.7 billion in operating income, 38% and 45% of the company's overall totals, respectively. Clearly, it is vital for Disney to bring the parks back to full strength.

It's a positive sign that park reservations at Disney World and Disneyland are stronger in the fourth quarter so far than in the third quarter when the segment earned $4.3 billion in revenue while booking $356 million in operating profits. Most importantly, not all of Disney's theme parks were open during the whole third quarter. For instance, Disneyland in California was open for 65 days and its Paris park was open for just 19 days. Barring any major COVID-19 outbreaks causing future shutdowns, all of its theme parks will be open for the entirety of the fourth quarter. That should drastically improve the segment's sequential results.

That being said, the parks are not experiencing the snap-back in attendance and revenue that many investors expected when they reopened. Many thought that people cooped up at home for the better part of a year would be eager to return to Disney's theme parks. So far, that has not played out. One reason could be restrictions on international travel. Many typical theme park visitors are traveling overseas, and they could be hesitant to schedule those trips because of uncertainty regarding cross-border mobility.

When the parks were closed, the company worked on several initiatives to improve their performance upon reopening. The big change is a new reservation system that allows the company to better manage park attendance. If Disney staff see that reservations for a particular park during certain weeks are low, the company can discount tickets or offer other promotions to encourage visitation.

Another change was revamping a system that allows guests to skip ride lines. The program, formerly called FastPass and available for free and only on a few rides, is now called Genie+. It will give guests the option to pay $15 per day at Disney World and $20 per day at Disneyland to skip lines all day.

Overall, these changes should be able to improve the theme parks' revenue and operating profit. But it remains to be seen if these efforts will have the desired effects or will end up annoying customers instead.

Reopened parks, vaccinated populations, and pent-up demand were all supposed to pump up Disney's stock price in 2021. That has not been the case so far, with the stock down 2.3% year to date. Investors will have to wait a bit longer for the company to return to full strength. But quarter-over-quarter improvement at the theme parks is a step in the right direction.