The House of Mouse is poised to thrive as economies reopen.

The Walt Disney Company (DIS -0.08%) was hit hard at the pandemic's onset. The entertainment titan had to temporarily shut some of its most lucrative, revenue-generating businesses to help slow the spread of COVID-19. The rebound from this challenging time will not be fast or easy. Therefore, the reopening will transition more like a dimmer than a switch.

Thanks to human ingenuity, scientists developed a vaccine against the virus in record time. Close to 6 billion doses of coronavirus vaccines have been administered worldwide. The daunting accomplishment is allowing governments to reopen economies. The change will once again alter consumer spending, this time away from manufactured goods and toward services. Here's why Disney is my top stock to buy as economies reopen. 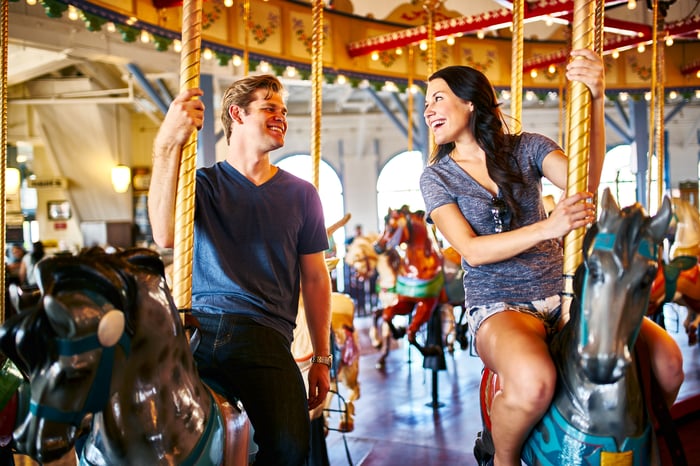 Disney's most negatively affected business since the pandemic's onset has been its theme parks. The massive entertainment destinations rely on bringing thousands of people together, often in close proximity. All its parks had to close their turnstiles at the pandemic's onset and are only recently beginning to reopen.

Importantly, management did not sit still during the pandemic. The company made several changes to the theme park segment that could make it more profitable. Legacy passholder programs were canceled and replaced with new ones to allow the company to manage attendance better. Several restaurant ordering systems were digitized, removing the need for cashiers to take orders and payments.

One silver lining from the pandemic for Disney is that it built out its streaming services at a rapid speed. The company launched its flagship service (Disney+) in November of 2019, and it has already reached 116 million subscribers. Along with Hulu and ESPN+, its streaming services boast a total of 174 million paying viewers.

Revenue in the streaming segment is running at an annualized rate of $17 billion. What's more, the division is not even close to reaching its full potential. The company just launched Disney+ in Latin America, and management estimates its streaming subscribers will total over 300 million at maturation.

Disney has a history of solid operating performance. In the last decade alone, the company averaged an operating profit margin of 22.3%. With the improvements made during the pandemic, there is no reason to believe it cannot earn similar or better margins in the next decade. Pent-up demand from folks cooped up at home for over a year might push profits higher than average in the next few years.

The main risk Disney is facing is the decline of its cable channel business. Folks are increasingly canceling traditional cable and satellite TV subscriptions in favor of streaming. Even though Disney benefits by adding to its streaming segment, the trend is a risk. Here's why: its streaming segment is still not profitable as Disney invests in building it out.

By contrast, the company's media segment generated 50% of overall operating profit for the company in 2019. Looking at 2019 is more informative because of the disruption caused by the pandemic in 2020. Still, the risk is manageable. Revenue and profit in the segment are not falling fast.

Disney is an excellent buy today

As economies reopen, its theme parks are poised to thrive. A robust streaming segment will supplement them, and the overall business is likely to generate a healthy profit margin. For those reasons, Disney is my best reopening stock right now.