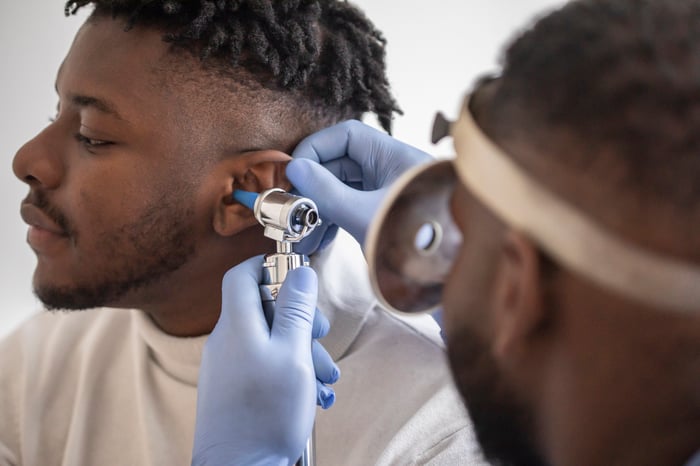 There was no news that brought the stock down, but investors were likely doing a little bit of profit taking a day after Eargo stock rose nearly $3 a share. This was coming on the heels of a report from the Food and Drug Administration (FDA) that it was considering a proposal to establish a new category of hearing aids to be sold over the counter. That move would benefit Eargo, which says its Eargo 5 model is hard for others to detect and markets its hearing aids to consumers at a discount. On Thursday, Eargo hit its highest point since the company announced on Sept. 22 after the market closed that it was under a U.S. Department of Justice (DOJ) investigation for insurance fraud, and the stock dropped more than $14 a share.

The company isn't out of the woods yet as there has been no new word on the investigation. However, the company's financials have been improving. In the company's second-quarter earnings report, it reported revenue through six months, of $44.9 million, up 57% year over year. Also in the report, the company boosted its guidance for yearly net revenue from between $89 million and $93 million to between $93 million and $96 million. The company, which had its initial public offering last October, isn't in the black yet, though. It lost $19.3 million, or $0.50 per share, in the second quarter.

Eargo has the potential to be a disruptor in the hearing aid industry, but until the DOJ announces its findings from the investigation, investors are likely to be skittish about jumping into the stock.

Get an Earful of This Growing Healthcare Stock
409%