Renewed interest in electric and autonomous vehicle names is boosting shares so far this week.

Shares of several electric vehicle stocks surged yesterday on various items of news that ended up driving Tesla's market cap over $1 trillion for the first time. Today, some of that excitement has shifted to autonomous vehicle names, including Velodyne Lidar (VLDR -5.31%). The stock jumped almost 18% at session highs, and remained 10.2% higher as of noon EDT.

The main driver for names that specialize in lidar technology -- a laser scanning technology used for autonomous or assisted driving vehicles -- came from an analyst report suggesting the stock of Velodyne competitor AEye could almost quadruple. That sent AEye shares to more than double at its highs of the day, though that name has also pared some of those gains. 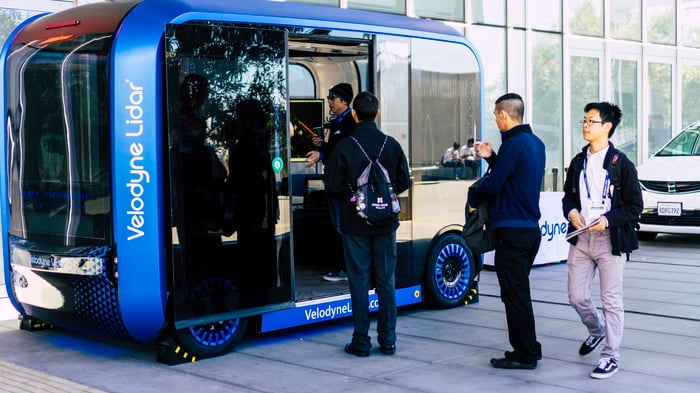 For its part, Velodyne stock can use any reason to move up. Shares are down more than 70% year to date, as the company remains engaged in a battle with its founder and former chairman, David Hall. The board of directors removed Hall from his role in February 2021. Hall's wife was also dismissed from her role as marketing chief at the time as the company accused the couple of "failure to operate with respect, honesty, integrity, and candor."

As recently as late August, the company and Mr. Hall traded new accusations, and the stock has continued to dwell at its low levels. Velodyne's tech is used in a range of applications beyond the automotive realm -- among them smart city applications, robotics, industrial, and mapping. If the fight with Hall ever gets removed as a backdrop, investors will be more apt to focus on the company's business results. It reports third-quarter earnings next week on Nov. 4, where investors will look for data on sensor unit shipments and the number of projects in the pipeline.