The online-brokerage's stock has dropped below its IPO price.

The company's net loss widened from $11 million to a whopping $1.32 billion, or $2.06 per share, which also missed expectations by $0.69. Its adjusted earnings before interest, taxes, depreciation, and amortization (EBITDA) also came in at negative $84 million, compared to a profit of $59 million a year earlier. 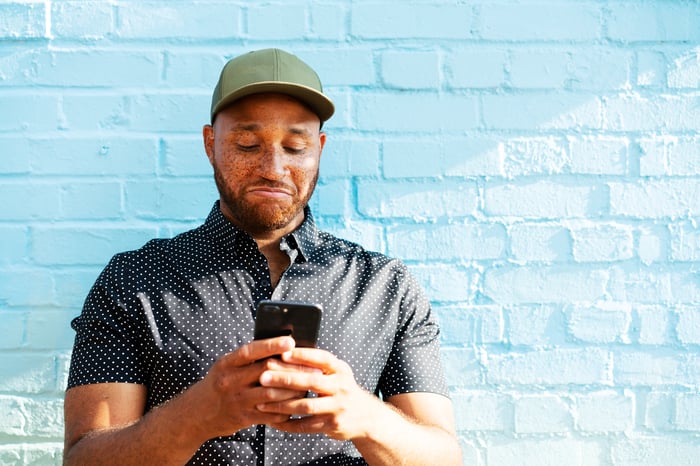 Robinhood's full-year forecast for "less than $1.8 billion" in revenue, which would represent 85% growth at the top end, also missed analyst expectations for 111% growth. That barrage of bad news caused Robinhood's stock to slump below its IPO price of $38. Could that post-earnings sell-off represent a good buying opportunity?

Robinhood disrupted the traditional brokerage market by providing free stock and cryptocurrency trades on an easy-to-use app. It rewarded new users with free shares of random stocks and gamified the investing experience.

Those strategies locked in a lot of younger users. At the time of Robinhood's IPO, approximately 70% of the company's assets under custody (AUC) came from users between the ages of 18 to 40, with a median age of 31.

Robinhood grew like a weed during the pandemic as stay-at-home measures, stimulus checks, and a growing interest in stocks and cryptocurrencies on social-media platforms brought millions of new users to its app.

Is Robinhood losing its momentum?

Robinhood's MAUs increased another 76% year over year to 18.9 million in the third quarter of 2021. However, that also represented a sequential drop of 11% from its 21.3 million MAUs in the second quarter.

Robinhood's average revenue per user (ARPU) fell 36% year over year (and 42% sequentially) to just $65 in the third quarter. Its number of funded accounts and AUC rose year over year, but both metrics also fell sequentially.

All these numbers suggest that many of the pandemic-related tailwinds -- especially mainstream interest in "meme stocks" and newer cryptocurrencies like Dogecoin -- are gradually fading away.

Robinhood's transaction-based revenues, which accounted for 73% of its top line, rose 32% year over year to $267 million during the third quarter. Within that total, its options revenue rose 29% to $164 million and its cryptocurrency revenue soared 860% to $51 million, but its equities revenue declined 27% to $50 million.

In short, more of Robinhood's active users are engaging in riskier options and cryptocurrency trades than simply buying or selling stocks. This trend could expose the company to even harsher criticism regarding its "gamification" of investing and its alleged exploitation of inexperienced investors.

Robinhood's top-line growth still looks impressive, but its massive losses are impossible to ignore. Last year, the company looked like it was on a path toward generating stable profits. But when it went public, it launched a stock-based compensation plan that would pay its founders billions of dollars in bonuses if its stock price hit certain targets after its IPO.

In the first nine months of 2021, Robinhood paid out a whopping $1.25 billion in share-based compensation related to that plan -- nearly all of which was recognized in the third quarter. At the end of September, there was still $2.17 billion in unrecognized share-based compensation from that plan, which Robinhood could recognize over the next 2.5 years.

Excluding its stock-based compensation from both periods, Robinhood would still have posted a net loss of $72.4 million in the third quarter -- compared to a loss of just $9.1 million a year earlier. In other words, Robinhood will likely remain unprofitable for the foreseeable future.

With a market cap of $33 billion, Robinhood trades at over 18 times the high end of its revenue forecast for the full year. That might be a reasonable price-to-sales ratio for a company with stable growth rates, but Robinhood's momentum is fading and its future growth is uncertain.

I believe Robinhood's post-earnings plunge was justified. Its growth is slowing down, losses are widening, and it faces too many unpredictable challenges. Investors should see if Robinhood's sequential growth stabilizes, it reduces its dependence on volatile cryptocurrencies like Dogecoin, and it overcomes the SEC's regulatory challenges before buying this beaten-down stock.

Should You Buy the Dip in This Cathie Wood Favorite?
401%