At least, shareholders of these stocks better hope so.

Famed investor Sir John Templeton is credited with saying the four most dangerous words in investing are "this time it's different." It's an acknowledgement that there seem to be fundamental laws with respect to risk and return that can bend for a while but do not ultimately break.

For the past few years, the market has been full of stocks that are close to buckling many long-held beliefs. Home Depot (HD 3.16%), Context Logic (WISH 7.52%), and Tesla (TSLA 3.94%) are three companies with their own unique stories. But shareholders in each are hoping that the old adage rings false. And it truly is different this time. Here's why. 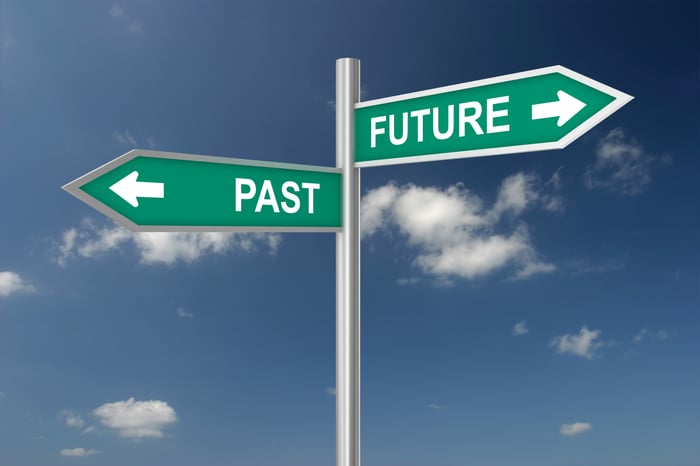 But a hot housing market and low interest rates have pushed shares beyond reasonable multiples of sales and cash flow. Both the price-to-sales and multiple of operating cash flow are well above what they were before the pandemic. They are triple what they were during the housing bubble of the mid-2000s. 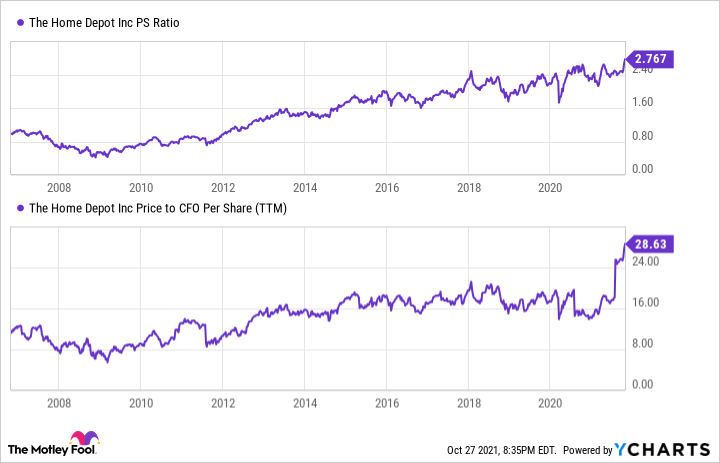 That's not to say it's a bad company. Home Depot is exceptionally well managed and has grown earnings per share almost 20% compounded annually since 2012. With Lowes, it forms one of the most formidable duopolies of consumer discretionary spending. Its 1.8% dividend yield is even better than a 10-year U.S. Treasury.

But graphs like those above have tended to end in heartbreak for investors over the long history of the stock market. Eventually, economic factors normalize and the exuberance subsides.

A confluence of tailwinds and a lack of alternative sources of yield have driven money into stocks like Home Depot, sending shares far beyond previous valuation ceilings. The last time the stock traded at this multiple of sales, it fell 70% and didn't set a new high for more than a decade. Maybe that won't happen in the 2020s. After all, it could be different this time.

This e-commerce company is one of 2021's biggest losers

Keith Noonan (ContextLogic): You can count me among the ContextLogic shareholders who are hoping that "this time it's different." The company's last quarterly report was disastrous and outlined some serious flaws and headwinds impacting the business.

ContextLogic's core business revolves around its Wish e-commerce platform, which specializes in low-cost, off-brand goods. The company's revenue slumped 6% year over year in the second quarter -- a performance that raised some serious red flags even in the context of the challenging comparisons that the business was facing when stacked against the pandemic-driven online retail surge in 2020.

ContextLogic stock trades down roughly 72.5% across this year's trading and roughly 82% from the high that it hit earlier this year amid a broader surge for tech stocks.

While Amazon and other players have built massively successful online retail businesses around rapid delivery, the Wish platform offers users the chance to get goods at very low prices if they're willing to wait. With supply chain problems putting the squeeze on the overall retail sector, delivery times have gotten even longer in many cases, and ContextLogic's focus on low margin goods has proven to be an especially poor fit for the current economic conditions.

Big turnarounds tend to be enormously difficult. Historically, they have a very low chance of success. In most cases, it winds up not being "different this time." So, why am I holding on to my shares?

Put simply, I think the company looks cheaply valued trading at roughly 1.5 times this year's expected sales and sporting a market cap of roughly $3.5 billion, and I'm willing to see how ContextLogic's third-quarter results and forward-looking commentary come in. However, I'm doing that with the understanding that the current outlook is somewhat fraught.

Is it time to believe the hype?

Rich Duprey (Tesla): The big news recently was Tesla surpassing $1 trillion in market valuation, the first automaker to ever achieve that milestone and one of only a very small handful of companies that can say it's worth so much. Today, the electric vehicle maker is the fifth-most valuable stock on the market.

Although its latest surge in value came as a result of the car rental giant Hertz placing an order for 100,000 Tesla Model 3 sedans over the next 14 months, or some $4 billion worth of EVs, it's been a long time coming. Tesla has basically turned from a risky start-up into the most valuable automaker -- and one of the most valuable companies in any sector -- in just 10 years. It's also turned CEO Elon Musk into the world's richest man (sorry, Jeff Bezos, it was fun while it lasted).

Business has been booming for Tesla. Last quarter it delivered a record 241,000 vehicles, virtually all of which were its newer Model 3 and the Model Y crossover vehicles. They represented 95% of the total. And its recently completed factory in Berlin should help it meet growing demand in Europe where research firm Jato Dynamics reported the Model 3 was the top-selling vehicle on the continent last month.

The quarter was Tesla's ninth straight quarter of profitability, so while it's a cliche used a lot, the EV maker is really firing on all cylinders (if only Teslas had cylinders). And yet that's not the whole of it.

While Tesla's primary revenue stream is its EVs, energy generation and storage -- its battery and solar businesses -- is growing. Sales jumped 39% to $806 million in the third quarter, but importantly, the costs of those operations was $803 million. That marks the second straight quarter where revenue exceeded the cost of production and distribution for Powerwalls, Megapacks, and solar.

Tesla also launched its telematics insurance product in its first state, Texas, that offers premiums based on real-time driving behavior (it offers traditional auto insurance in California, too). This is a small business at the moment, but could become an especially competitive one for the EV maker.

Tesla is a constantly evolving creature and well worth the premium its stock represents.