This top gaming stock could double in value in the next five years.

Activision Blizzard's (ATVI 1.29%) stock price has fallen 24% from its highs over the last few months. The drop can be blamed on a few things: difficult growth comparisons with 2020, and negative headlines around lawsuits and investigations relating to Blizzard Entertainment's workplace culture.

The latter doesn't dissuade me from buying the stock, because personnel can change, but it's the games that matter. The value is so good in the stock right now, I decided to buy some ahead of the upcoming earnings report on Tuesday, Nov. 2. 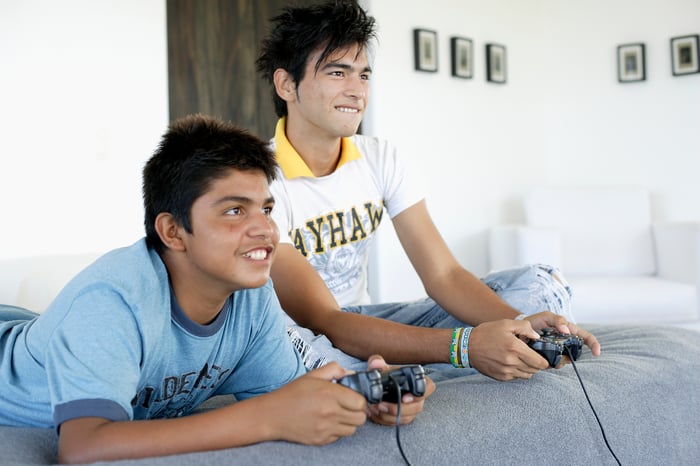 The sell-off has brought the stock down to a price-to-earnings (P/E) ratio of 21, based on the consensus earnings estimate for 2021. This valuation compares favorably against top video game stocks like Electronic Arts and Take-Two Interactive. 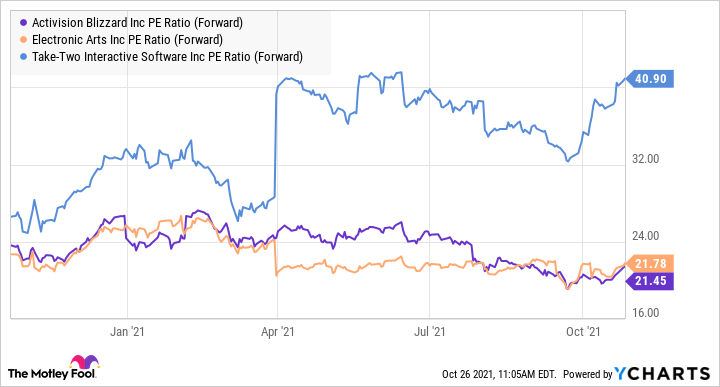 Activision has plenty of long-term growth initiatives in place with upcoming releases of Diablo: Immortal, Diablo 4, and Overwatch 2 waiting in the wings. In the near term, it could see strong sales for the next installment in the annual Call of Duty series (Call of Duty: Vanguard) releasing on Nov. 5. With supply shortages plaguing the retail industry, particularly toys, digital game sales might see an extra boost this holiday season.

Most importantly, Activision is releasing Vanguard into a bigger installed base than before the pandemic. Call of Duty: Mobile launched in October 2019 and has been downloaded over 450 million times, and the free-to-play Call of Duty: Warzone reeled in millions of new players, too.

I like how stable the player base has been going back to the fourth quarter of 2019. It's apparent that new content has kept players engaged, particularly within the Activision segment (Call of Duty), despite the great reopening happening through the first half of 2021. 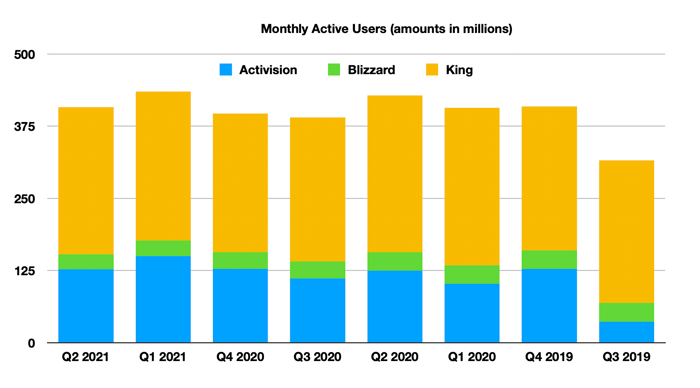 Activision has turned Call of Duty into a highly engaging franchise over the last few years that is leading to higher in-game spending for battle passes and other in-game rewards. In-game bookings increased 14% year over year to $2.6 billion through the first half of 2021 and comprised two-thirds of the business. Activision credited higher spending in Call of Duty: Modern Warfare and higher in-game spending and advertising revenue in the Candy Crush mobile franchise for that increase.

Management has been talking about growing monthly active users to 1 billion over the long term. I'm confident they can do that given how well the company has executed within the Activision segment. A replication of the Call of Duty playbook across other franchises should lead to similar outcomes, especially given the passionate fan base around Blizzard's titles like World of Warcraft, Diablo, and Overwatch.

If Activision is successful in more than doubling its player base, that should grow profits faster than revenue. That would mean twice as many players spending money on in-game content, which tends to generate higher margins than sales of new games. Analysts currently expect the company's adjusted earnings per share to increase at an annualized rate of 13.9% over the next five years. At a P/E of 21, that growth on the bottom line would support a much higher stock price by 2026.

Activision Blizzard has found a successful content strategy and monthly active users are higher than two years ago, all while the stock price has fallen 24% off its highs. At these lows, the chances are good I could double my money in the next five years, which is why I bought the stock.