A change in plans regarding the buyout proposal for a competitor has DraftKings looking sweet.

The history of online sports betting goes back to 1996. Over the years the landscape has changed with new competition entering the market, new states legalizing the practice, and the development of technology allowing for faster data transfer rates and more data at the hands of bettors. But some things have also remained the same, such as the offering of free bets, bonuses, and other attractive antics to get the attention of more bettors.

DraftKings (DKNG -2.59%) is now one of the primary players in this online sports betting space, and is flexing its muscle and cash in order to attract and keep bettors as it faces tough competition from the likes of FanDuel (95% owned by Flutter Entertainment), and BetMGM (jointly owned by MGM Resorts and Entain). As industrywide online sports betting revenue increases, can DraftKings keep its expenses in check enough to provide a treat for investors to savor for the long term? 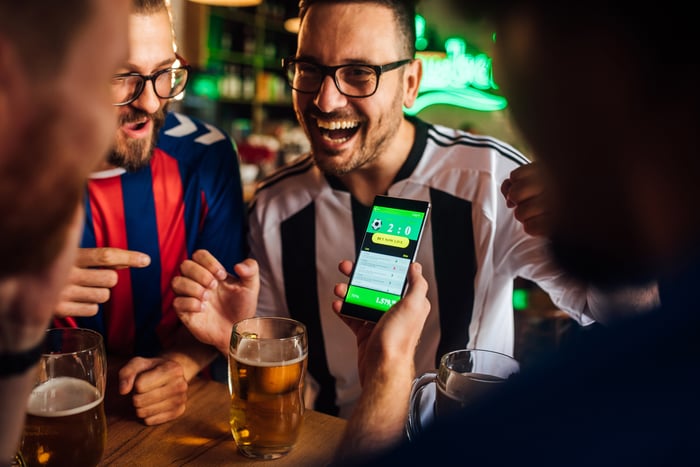 Second-quarter revenue came in at $298 million, an increase of 297% year over year for the same period in 2020, which speaks volumes considering many of us were locked down amid the throes of the COVID-19 pandemic at that time, and looking toward online entertainment for freedom. Perhaps more importantly than the massive climb in revenue was the 281% increase in monthly unique players in online gaming, as well as the average revenue per player rising by 26% on a year-over-year comparison. New players plus increased revenue per player should pave the way for continued revenue growth.

The company saw increases in the number of active paid bets for the NBA playoffs as well as the Masters golf tournament. But what should give investors added excitement for continued growth is that the NFL kicked off in September -- the tail end of the third quarter -- and is the third-biggest sport for online betting in the world, and first in the U.S., by volume.

In September reports built up that DraftKings was planning a $22.4 billion buyout offer for Entain, one of the world's largest online gambling and gaming groups, which jointly owns the DraftKings competitor brand BetMGM. The idea of the buyout didn't sit well with investors of DraftKings. The proposal initially drove Entain's stock price to a record high while ultimately -- combined with a second-quarter earnings miss -- pushing DraftKings stock price much lower by nearly 27% from Sept. 9 through Oct. 22.

After the company announced on Oct. 26 that it would forgo its bid to obtain Entain, investors rejoiced, sending the stock up over 5%. It also helped lead to a purchase by Cathie Wood's ARK Investment Management of 235,000 shares.

Analysts are in disagreement on the ratings of DraftKings stock, with rating values running the gamut -- everything from sell to buy. BTIG initiated coverage on Oct. 27 with a neutral rating, while Roth Capital began its coverage with a sell. Meanwhile, Craig Hallum analyst Ryan Sigdahl reiterated a buy rating in September following second-quarter earnings, raising his price target by 17%, from $60 to $70.

Part of the reason for disagreement might be based on the rise in operating expenses as the company continues to grow. In the second quarter, operating expenses according to generally accepted accounting principles (GAAP) were more than double what they were in 2020 on a year-over-year quarterly comparison, driven by sales and marketing expenses that nearly quadrupled for the same time period. If the third quarter, supported by a continued increase in revenue, can somehow get some backing by more restriction on expenses, there is a good possibility of the stock turning the corner.

The current stock price sits at $48, well below the 52-week high of $74, and at a 46% discount to Sigdahl's target, which happens to be in line with the average analyst price target of $70. However, the company has a history of missing on earnings. For the past five quarters actual earnings have come in lower than consensus estimates, leaving investors to ponder the thought of another miss. For now I'm keeping a close eye on the third-quarter earnings call expected on Nov. 5. If revenue can match the guidance provided during the second quarter, while expenses show signs of stability, an earnings surprise could be in store, making the September sell-off a great opportunity for investors.