After recent gains, Canaan stock is now up roughly 55% across 2021's trading.

Shares of Canaan (CAN 4.54%) gained 40.3% in October, according to data from S&P Global Market Intelligence. The cryptocurrency mining stock surged in conjunction with strong positive momentum for Bitcoin (BTC 0.22%). 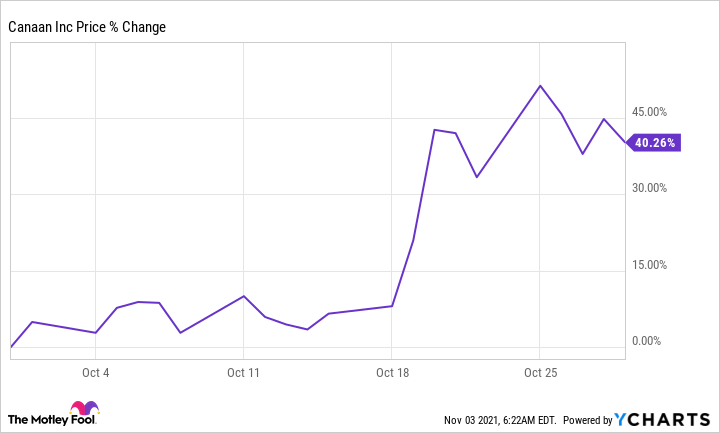 Canaan provides specialized hardware for the mining of cryptocurrencies, and bullish momentum in the crypto space typically helps push the stock higher. The price per Bitcoin token surged roughly 48.7% last month, helping the cryptocurrency mining specialist's share price post big gains over the stretch. The stock also appears to have gotten a substantial boost from the announcement of a new share repurchasing plan.

Canaan published a press release on Oct. 20 announcing that its board of directors had authorized an additional $20 million in stock buybacks, bringing its total authorized amount to $20.7 million. The company will have until Sept. 20, 2022, to complete the potential purchase.

As noted by CEO Nangeng Zhang in the press release, Canaan believes that its current valuation does not fully reflect the company's growth potential. While the $20 million buyback approval looks relatively small in the grand scheme of things, it still signaled a vote of confidence from management and the company's board, and investors bid the stock higher following the news.

Canaan stock has continued to gain ground early in November's trading. The company's share price is up roughly 7.6% across the stretch. Meanwhile, the price per Bitcoin token has climbed roughly 2.9%. 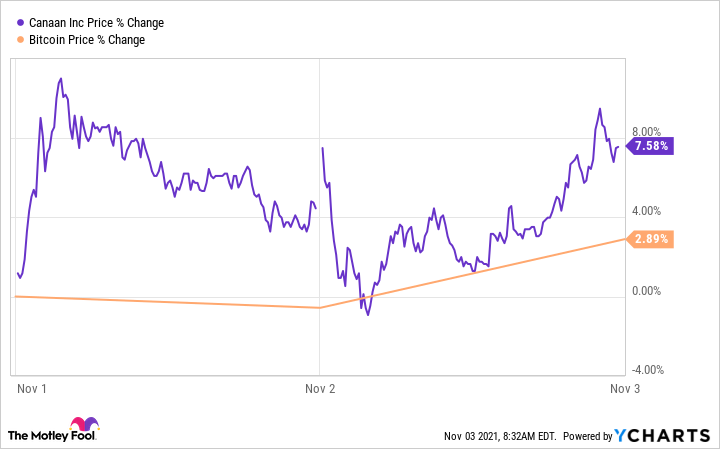 Canaan now has a market capitalization of roughly $1.6 billion. With that in mind, the company's recent authorization for an additional $20 million in stock buybacks looks somewhat symbolic and hardly indicates that management is pivoting away from growth initiatives in favor of returning value through share repurchases.

The company is still investing in the development and sale of Bitcoin mining machines, and its stock will likely continue to trade in conjunction with pricing movements for the market-leading cryptocurrency. Canaan posted revenue of roughly $167.5 million in the second quarter, and it expects to grow sales between 10% and 30% on a sequential basis in the third quarter.

As Bitcoin's price per token rises, so too has demand for Canaan's mining hardware. That suggests that the stock could continue to post big gains if Bitcoin continues to climb. However, investors should also approach Canaan with the understanding that the stock still looks like a somewhat risky investment, and it could also see significant sell-offs if Bitcoin loses substantial ground.

Why Shares of Bitcoin Mining Company Canaan Are Plunging Today