Shares of MercadoLibre (NASDAQ:MELI) fell 11.8% in October, according to data from S&P Global Market Intelligence. And this is on top of a 10.1% decline in September!

There wasn't much in the way of company-specific news for MercadoLibre in October. The company had announced the launch of its own special-purpose acquisition company (SPAC) in September and closed the $287 million raise for MELI Kaszek Pioneer Corp on Oct. 1. The SPAC is currently on the hunt for a target to buy.

More likely, MELI's continuing woes had more to do with a deteriorating macroeconomic backdrop in Brazil. 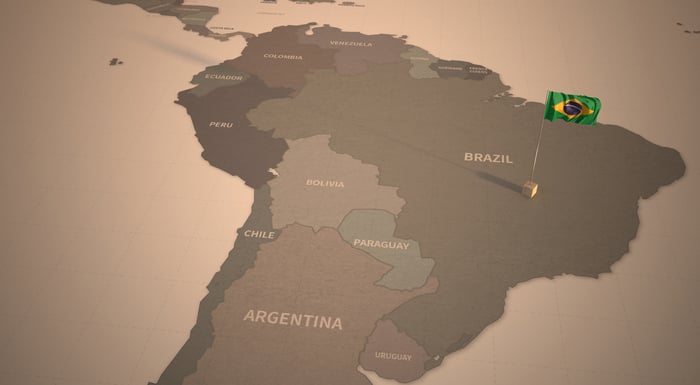 During October, Brazil president Jair Bolsonaro unveiled a plan to increase welfare spending for the poor, as the country contends with both high inflation and high unemployment. Despite assurances, the new spending plan generated concerns that Brazil would breach its constitutional spending cap.

Inflation, higher interest rates, and general economic problems could have an effect on MercadoLibre's results, as Brazil is its largest market, accounting for over half its revenue -- nearly three times the size of its next largest market of Argentina. Brazil was also tied with Mexico as the fastest-growing end market for MELI in the second quarter (in terms of U.S. dollars).

While MercadoLibre could raise prices to combat inflation, and while its Mercado Pago payments solution earns revenue as a percentage of gross merchandise volume, if citizens have to spend a lot more of their money on necessities like food and fuel, that leaves less left over to buy more discretionary items on MercadoLibre's e-commerce platform.

Investors will see how MercadoLibre navigates these economic headwinds when the company reports earnings on Thursday, Nov. 4.

There is a chance that expectations are low enough now that even less-than-stellar earnings would boost the share price. After all, MELI's stock is down about 8.9% for 2021 while the S&P 500 is up 23.3%. And its price-to-sales ratio has fallen to around 13, or where it was pre-pandemic. Therefore, long-term oriented investors may wish to look at MercadoLibre's stock, which has been a long-term market-beater, after its rare off-year.