If its coronavirus pill project can't be salvaged, it'll be trouble for investors.

Part of being a skilled biotech investor is knowing when discretion is the better part of valor. When bad clinical trial results roll in, your favorite holding might get roiled -- and it might not have enough momentum to ever recover. By the same token, if you're willing to bet on biotechs that everyone else has given up on, you just might win the lottery down the line.

And that's exactly the dilemma facing investors in Atea Pharmaceuticals (AVIR 0.89%). After the announcement on Oct. 19 that its oral antiviral for COVID-19 failed in clinical trials, its stock dropped about 70%, and the company's future is now uncertain. But with danger comes opportunity, and such a steep drop might well make for a massive bargain if Atea manages to make a turnaround. Is this company worth taking a risk on? 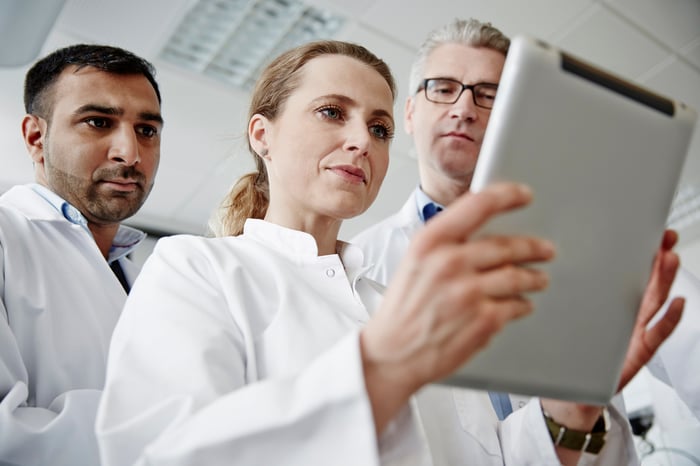 It's tough to live up to the antiviral pill hype

Compared to the intravenously administered antibody cocktails and antivirals produced by the likes of Regeneron and Gilead Sciences, Atea's antiviral candidate, called AT-527, has the advantage of being a pill rather than an infusion, which cuts down on labor and patient discomfort. Plus, it's significantly cheaper to manufacture than antibody therapies, which means that it could ultimately have a much wider distribution.

AT-527's most obvious use case would be to treat people who are confirmed to be infected with the coronavirus so that they have a lower chance of developing severe disease, much like Merck's frontrunning antiviral pill, molnupiravir. But it could also be used to prevent people who have been exposed to the virus from developing a symptomatic infection, or to protect people who are at high risk of exposure, like healthcare workers in a COVID ward during a surge.

Of course, there's one big issue with AT-527: It wasn't proven effective in its phase 2 clinical trials, which is what tanked Atea's stock. 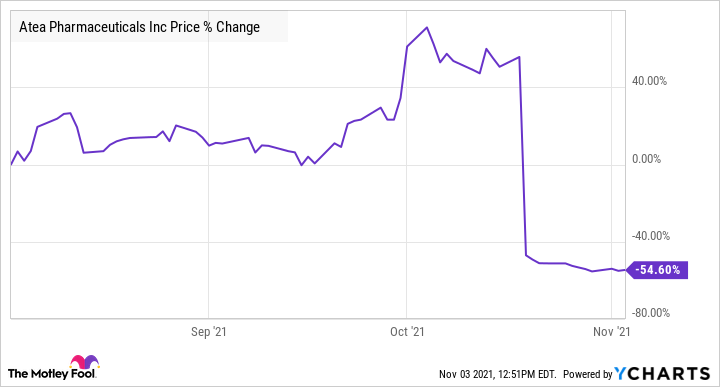 At every dose level and in both cohorts of patients that the trial investigated, Atea's drug failed to reduce viral load beyond the results of a placebo. For a biotech developing an antiviral drug, failing to reduce the viral load is a very big whiff, and it almost certainly means that the pill failed to reduce patients' symptoms. On the bright side, the medicine didn't seem to have a dangerous side effect profile, though nausea and vomiting did cause 17% of the patients in the higher-dose cohort to discontinue treatment.

Regarding the pill's lackluster efficacy, the company is quick to point out that the subgroup of patients with underlying health conditions may have experienced lower viral loads than patients who received a placebo. In my view, that interpretation of the results is far from convincing, as the placebo patients exhibited a very high variance in viral loads thanks to the fact that some were vaccinated and that they were likely infected with different variants of the virus.

It's a gamble with long odds

In case it wasn't obvious from the last section, I don't have much hope for Atea figuring out a path forward with AT-527 that doesn't involve combining it with other drugs or targeting it at a much smaller slice of the population and running a fresh trial.

Aside from AT-527, Atea doesn't have much in its pipeline that could deliver for investors anytime soon. It's currently working on antivirals for dengue fever, hepatitis C, and respiratory syncytial virus, but all of its projects are quite early-stage.

So if there is any hope for Atea's stock to recover in the next couple of years, it lies with AT-527, which isn't looking so good at the moment. Beyond that period, even if AT-527 isn't salvaged, you should expect it to have the somewhat slim chances of a typical biotech stock. Still, if you're willing to make a speculative investment in the meantime, the company might make a turnaround with some new initiative to revamp the antiviral. But right now, I wouldn't bet on it.

Why Atea Pharmaceuticals Stock Got Crushed This Week

Why Atea Pharmaceuticals Is Imploding Today
413%