The company's Q3 revenue was lower than expected.

Shares of Nektar Therapeutics (NKTR 6.10%) were plunging 19% as of 3:53 p.m. EDT on Friday. The big drop came after the company announced its third-quarter results following the market close on Thursday.

Nektar posted a net loss in the third quarter of $129.7 million, or $0.70 per share. This result was better than the average analysts' estimate of a Q3 loss of $0.80. However, the company's revenue of $24.9 million fell short of the consensus estimate of $27.9 million. The revenue figure also declined 17% year over year. 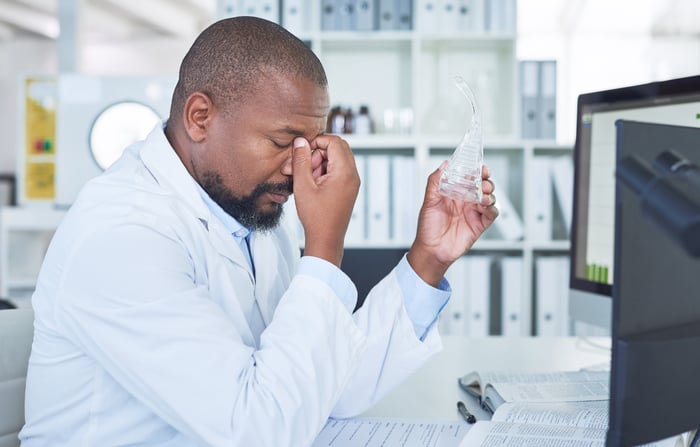 Nektar's Q3 results weren't an apples-to-apples comparison with the prior-year period. In the third quarter of 2020, the company had $12.2 million in royalty revenue that it didn't have in the recent quarter. On the other hand, Nektar's non-cash revenue related to the sale of future royalties was nearly $9 million higher year over year in the third quarter of 2021.

Perhaps the most worrisome aspect of Nektar's Q3 update was that its product sales fell nearly 9% to $5.2 million. Nektar licensed opioid-induced constipation drug Movantik to AstraZeneca and hemophilia A drug Adynovate to Baxalta, which is owned by Takeda Pharmaceutical.

However, investors shouldn't focus too heavily on one quarterly snapshot. There are several potential catalysts on the way for the biotech stock.

Nektar has several upcoming presentations featuring data for its pipeline candidates. One of the most important of these is initial data from the Propel study evaluating a combination of bempegaldesleukin and Keytruda as a first-line treatment for non-small cell lung cancer. The company plans to present this data at the European Society for Medical Oncology immuno-oncology meeting in December.