The gaming start-up has been aggressively searching for ways to drive user growth. The excellent results from the new game are music to management's ears. 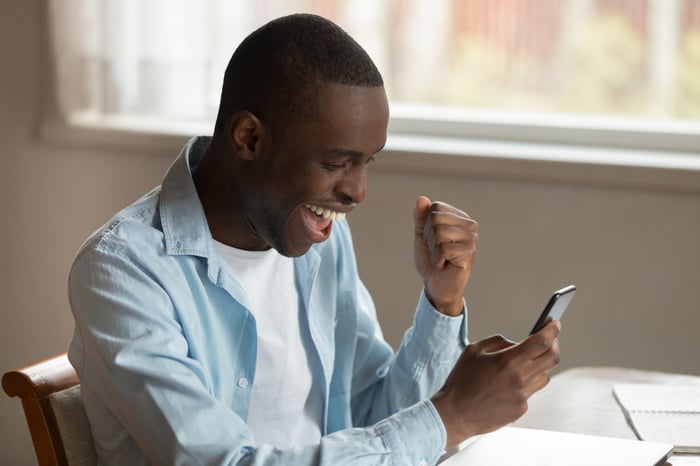 Skillz stock is down 44% this year. Image source: Getty Images.

Note: Skillz does not develop the games that appear on its platform. Outside developers build and bring the games to Skillz and then receive a percentage of the revenue generated from gameplay. Skillz's business model of outsourcing game development lowers its own risk. Developers spend the time and resources creating games that may or may not become a success. The downside of that strategy is that Skillz will have to share some of the upsides with developers when there is a huge success.

Big Buck Hunter: Marksman may prove to be one of those successes. The game launched on the Skillz platform in Q3 and quickly rose to become No. 1 in the app store under the sports category. The success was undoubtedly instrumental in driving new players to Skillz. In its fiscal Q3 ended Sep. 30, Skillz increased monthly active users by 11% year over year and 25% over the previous quarter.

Similarly, and more profoundly, revenue increased by 70% from the same quarter last year. Skillz earns revenue when players enter contests where they wager on the outcome, so a new title that drives engagement can spur increases.

Interestingly, Big Buck Hunter is not a new game, just new to the Skillz platform. The franchise has been around for at least 14 years and has a broad base of fans. There is even a Big Buck Hunter annual championship tournament that attracted 30,000 entrants and this year featured a mobile division powered by Skillz. The Skillz tournament was livestreamed to hundreds of thousands of Big Buck Hunter fans. That's valuable exposure for a young company that has 509,000 paying monthly active users.

Skillz is finding it challenging to get its stock higher

Still, the market was not impressed. Skillz stock was down 9% on the day following the earnings announcement with the excellent news about Big Buck Hunter. The market appears more focused on management's aggressive spending on marketing for user acquisition. In the last quarter and the previous three quarters of fiscal 2021, Skillz has spent more on sales and marketing than it has earned in revenue.

The trend is driving massive losses on the bottom line, and it could be deterring investors. Perhaps the market may be more willing to cozy up to Skillz shares if management announced moves to enhance game development and partnerships that bring new games to the platform. That remains to be seen. For now, Skillz stock is down 44% year to date, and management is showing no signs of slowing down spending to achieve growth.