Next-year sales growth looked slow in last month's guidance update, but the reasons behind that slowdown have been unstoppable and obvious for several quarters.

Shares of Duck Creek Technologies (DCT) fell 28.8% in October 2021, according to data from S&P Global Market Intelligence. The maker of software-as-a-service (SaaS) used by property and casualty insurance companies reported strong results for the fourth quarter of 2021. The report still triggered a massive price drop as market makers focused on Duck Creek's modest guidance targets instead. 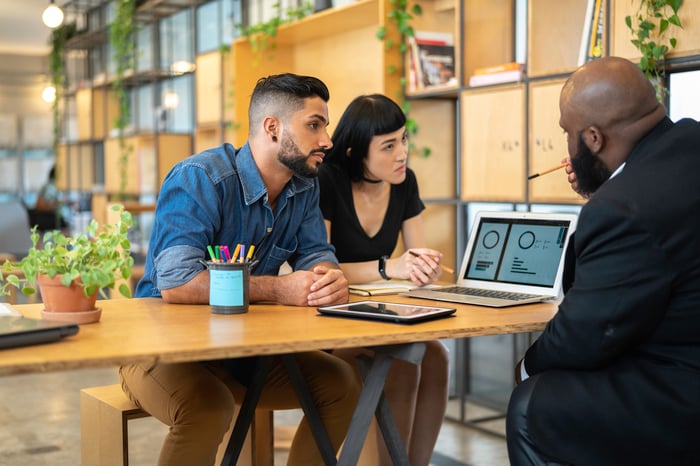 In the fourth quarter, Duck Creek's revenues rose 21% year over year to $70.9 million. Adjusted earnings stopped at $0.02 per share, based on $2.6 million in non-GAAP net income. This was in line with the year-ago reading. Your average analyst would have settled for fourth-quarter earnings of $0.01 per share on top-line sales near $69.1 million, so Duck Creek exceeded analyst targets across the board.

And then there's the guidance issue. Duck Creek projects first-quarter revenue of approximately $69 million, just above the $68.7 million Street consensus at the time. However, full-year sales should land in the neighborhood of $296 million while analysts had expected $303 million for this period. That's a forward-looking miss, and it's not a small one.

As a fast-moving growth stock with skimpy bottom-line profits, Duck Creek's market value is sensitive to perceived slowdowns in the company's revenue growth. From this perspective, the massively negative market reaction makes sense.

However, I would argue that Duck Creek's management set an overly conservative full-year sales target here, creating a bar that should be easy to clear. The young company already has a history of doing exactly that, including in the fourth quarter where the top end of management's revenue guidance stopped at $69.5 million. And when the company set up full-year targets from the vantage point of October 2020, the revenue line was projected to land below $249 million. The final full-year revenue result was $260.4 million, leaving plenty of air between the modest target and the robust result.

In the earnings call, Duck Creek's management celebrated the "strong underlying momentum" that is driving the business forward right now. Regarding the full-year sales target's relatively soft growth rate of roughly 14%, CFO Vinny Chippari noted that the expiration of a single legacy contract explains most of that action. Excluding this contract from the 2021 figures would lift the next-year guidance to a 30% effective growth rate. And none of this should come as a surprise to investors:

"It was a legacy agreement that carved out from Accenture in 2016 that we've known for a long time is going away," Chippari said. "That contract expired in June of 2021, so we did have 10 months of revenue in 2021. And that is creating a little bit of a headwind on the subscription revenue growth rate for fiscal '22."

In other words, Duck Creek investors are overreacting to a slowdown they should have seen coming a mile away. Share prices have fallen 35% in the past 52 weeks, and I am sorely tempted to pick up a few shares in this exciting fintech company while the discount lasts. This stock is springloaded for a massive rebound over the next couple of years as that troublesome legacy contract becomes a footnote in Duck Creek's financial history.