MercadoLibre has become the leader in a fast-growing market, but how much growth is left?

Shares of the Latin American e-commerce and payments giant MercadoLibre (MELI -1.31%) rose 5% on Friday, Nov. 5, after it reported strong earnings. Its growth was strong across all parts of the business.

MercadoLibre's earnings were impressive, but if you want to beat the market over the next five years, is this company the right one to add to your portfolio? After all, the stock is already worth more than $80 billion. The answer lies within the consistent dominance that was on display in its third-quarter performance. Despite its size, the company's market position and optionality could allow it to continue crushing the stock market for many years, which is why I still think it's worth buying today. 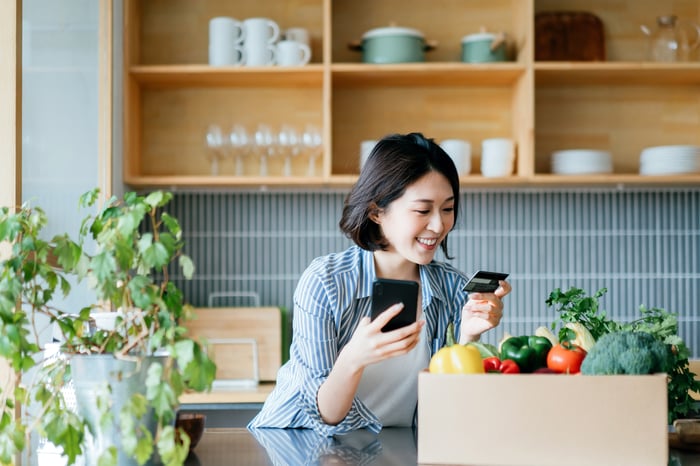 MercadoLibre operates in 16 countries across Latin America, including Mexico, Argentina, and Brazil -- offering solutions to democratize and popularize digital payments and e-commerce. The company's three main solutions are its e-commerce arm; its fintech arm, Mercado Pago; and its logistics service Mercado Envios.

Mercado Envios shipped over 247 million items in Q3, 80% of which were delivered within 48 hours. Over half of Envios' shipments were same-day or next-day, demonstrating that Envios was able to overcome the challenges inherent in its large geographic footprint. What might be most impressive about Envios is that it controls 37% of fulfillment activity in its markets, led by 65% control in Mexico.

The e-commerce platform -- MercadoLibre's most mature segment -- saw astounding growth despite its maturity. The company's gross merchandise volume grew 30% year over year to $7.3 billion, which is especially impressive considering the incredible performance during Q3 2020 amid strong tailwinds from the COVID-19 pandemic. Items sold grew 26% to 260 million compared to Q3 2020, and commerce revenues increased 69% year over year, reaching $1.2 billion.

What could slow down this giant?

At 15 times sales, MercadoLibre isn't cheap. While it is cheaper than other international e-commerce players like Sea Limited (SE -1.03%) -- which trades at 26.5 times sales this is still an expensive stock. The reason for this might be because the company faces extreme competition, namely from Sea Limited.

Sea Limited has a similar business model with e-commerce, fintech, and gaming arms based in Singapore. The company announced in late 2019 that it is attempting to expand its video game service and e-commerce operations into Brazil.

Already, Sea Limited has seen meaningful success in Brazil with its e-commerce business. In Sea's most recent quarter, it announced that the Shopee e-commerce arm ranked first in the shopping category by downloads and total time spent in-app. Sea also said the company's monthly active users in Brazil are the second-largest in the country. Despite operating in Bazil for just two years, Sea Limited has already seen amazing success, which is worrisome for MercadoLibre.

While nearly 80 million active users sounds like a lot, it's a small figure compared to the population of the geographic regions MercadoLibre covers. Across the 16 countries MercadoLibre operates in, there are 646 million people. Latin America is also one of the fastest-growing e-commerce regions in the world.

MercadoLibre has registered just 12% of its target population as customers across all platforms, meaning there is tons of room to expand its customer base and to cross-sell to its existing customers. The company is growing fast, and its ability to continue growing is still present. While it is already worth $80 billion, there is potential for this stock to grow by multiples from here, and if it can continue modernizing and democratizing Latin American commerce, MercadoLibre could achieve this potential.

Why MercadoLibre Stock Triumphed on Thursday
420%