Working from home became standard practice thanks to the pandemic, and it's a trend that's here to stay.

Of all the technology-driven trends that have emerged out of the pandemic, few have been as impactful as the work-from-home revolution.

It's something that probably wasn't possible even 10 years ago, but companies are now empowered by new software platforms and computer hardware with far greater capabilities. Work-from-home has been so effective that many firms are offering the arrangement to employees full time, or in a hybrid way, despite the pandemic slowly resolving.

Platform technology company Workiva (WK -0.28%) is a key enabler, as it unifies workflows and data across multiple applications, no matter where an organization's workforce is based. It just delivered a big third-quarter result, and it's another sign of the company's major potential. 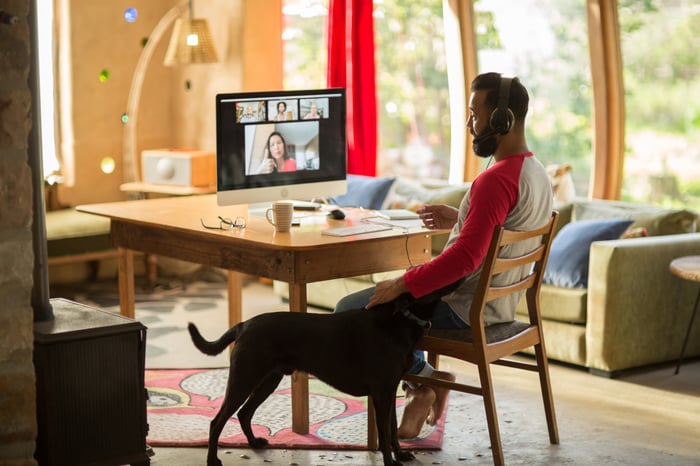 "Simplifying complex work" is more than just a marketing slogan for Workiva -- it genuinely does offer solutions that make the monotonous parts of running a large organization more manageable. Its specialty is reporting; whether its Securities and Exchange Commission (SEC) filings, internal audits, or management reporting, the company aims to unify data to generate accurate results.

It does so by aggregating data from across multiple technological applications. For example, in large organizations, some teams might be working with collaborative documents in Microsoft Office, and others might be working in Alphabet's Google Cloud, but Workiva can bring the data together from both platforms into one place.

This means that management has far greater visibility over workflows and can report progress up the chain more accurately. But they also don't have to go searching through multiple services to find the important information needed to compile critical SEC filings -- it's all neatly in one spot. Workiva now caters to over 350 different SEC forms and is used by eight of the top 10 banks.

Workiva now serves over 4,100 customers, including 75% of the Fortune 500 companies. But while its total customer base grew by 15% in the most recent third quarter, growth among its highest-paying customers trounced that mark.

It's an indication that the bigger the organization, the more useful Workiva's platform becomes, as there's more workflow and data to aggregate. Further, the company had a revenue retention rate of over 111% with add-ons, so existing customers were also spending more money with Workiva in the third quarter compared to the same period last year.

These results prompted the company to raise its full-year 2021 revenue guidance to $439 million, which would represent 24.8% growth compared to 2020. It's a notable growth acceleration, as between 2018 and 2020, Workiva grew revenue at a compound annual rate of 19.9%. As its largest customers become a greater percentage of the overall base, revenue growth is likely to speed up more over time.

Why Workiva has major growth-stock potential

Workiva isn't profitable yet on a full-year basis, but it's inching closer to breakeven, and analysts expect it will cross over into positive earnings territory in 2022. Additionally, the company is likely to generate over $500 million in revenue next year for the first time, and as it continues to build scale, its high gross margins of over 75% should result in rapidly improving profitability.

Employment trends are moving in the company's favor, as work-from-home is changing from a pandemic necessity to a carrot that organizations use to lure the best talent. Major consulting firm PricewaterhouseCoopers, for example, recently announced it will allow 40,000 of its U.S. employees to work on an entirely remote basis. Over time, this could set off a domino effect as other firms implement similar initiatives to compete.

It means platforms like Workiva are likely to grow more central to the operations of large companies, and such trends might be difficult to reverse. As Workiva's revenue retention rate suggests, once an organization experiences the convenience of this software, it won't just continue using it but also spend more to expand its use.

That spells opportunity for investors, particularly over the long term.

Workiva Stock Actually Gained 27% in the Second Half of 2022. Is the Worst Over?

This ESG Growth Stock Could Soar, According to Wall Street