Its stock might have been due for a correction, but its business is still soaring.

The market wasn't pleased with Upstart Holdings' (UPST 8.14%) third-quarter earnings, sending its stock down 23% on Wednesday after the release. The main beef with the report was that the artificial intelligence-based lending platform didn't trounce earnings as much as expected. But all in all, it was pretty darn good, with many positive results.

I won't whitewash the negatives, but see for yourself whether or not the earnings report was really that bad. 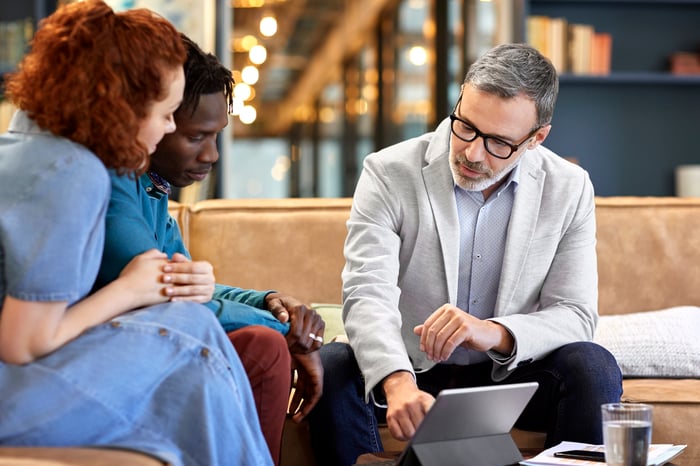 It's still just getting going

Upstart is still a tiny company, with less than $500 million in trailing-12-month revenue. But it's posting high growth. In the second quarter, revenue increased more than 1,000%, and the third quarter's 250% increase to $228 million wasn't too shabby. It also beat the guidance range of $205 million to $215 million.

Total loan originations also increased nearly 350% year over year to more than 350,000 loans, and the company went from 10 banking and other loan partners last year to 31 this year.

That's a significant number, since in its latest 10-Q filing in August, the company said that Cross River Bank and one other bank accounted for a large portion of its loans. Cross River itself accounted for 79% of loan volume in the six months ended June 30, 2020, but that share came down to 60% in 2021. Adding new bank partners is not only a path toward higher growth, but also a way to hedge the risk of having too many eggs in one or two baskets.

Finally, management gave guidance for fourth-quarter revenue to rise around 200% over the year-ago period. That's even more of a slowdown. But adjusted net income is expected to increase from $5.4 million in last year's fourth quarter to a range of $48 million to $50 million, or around 800%.

Interestingly, loans that were automatically approved fell from 71% to 67%. That might be due to the large increase in borrowers. According to CFO Sanjay Datta, "Newer borrower profiles will tend to have more conservative rates of instantaneous approval until we develop a longer history and greater loan volume for our models to train on." Revenue from fees alone with no credit exposure fell from 97% to 92%, which is probably also attributable to expanding its services and scale.

Is Upstart stock a buy?

CEO Dave Girouard spent a lot of time on the third-quarter conference call talking about new services, and as a new company, Upstart is quickly moving in many different directions. He mentioned that it will be tackling home mortgages in 2022, which is a huge opportunity.

He also said that "earnings beats" might not be as large going forward as the company has more experience and is getting a better handle on its business and expectations. So investors shouldn't be too disgruntled by low beats.

It's certainly been rewarding to own Upstart stock until now. Even with the post-earnings stock drop, shares have gained 530% so far this year. However, after third-quarter earnings, they are still trading at a premium valuation of 280 times trailing-12-month earnings.

It might have been time for some correction, and that shouldn't worry investors. It could provide a great opportunity to buy shares of this explosive stock.