These cannabis companies' third-quarter earnings show they're headed in the right direction.

Shares in OrganiGram Holdings (OGI 1.84%), Village Farms International (VFF 3.25%), and Green Thumb International (GTBIF 0.54%), are all down over the past three months. But that trend is unlikely to last. Much of the current malaise in marijuana investing has to do with the market becoming impatient with the pace of legalization for medical- and adult-use cannabis, and not necessarily anything to do with fundamental issues at these companies.

These three cannabis companies are all coming off strong third-quarter reports and are likely en route to record yearly revenue.

Instead of waiting until everyone else jumps back into cannabis stocks, it may be wise to buy in on these companies now while their share prices are still at a discount. 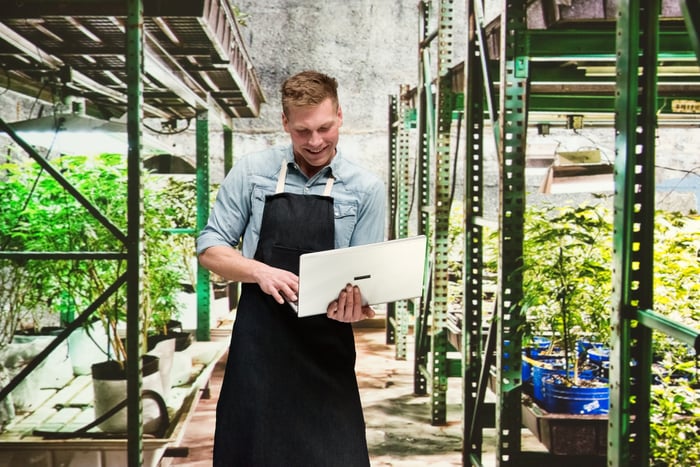 OrganiGram Holdings stock is down nearly 10% over the past three months, but it's up more than 7% in November, and I believe now is still a good time to buy the stock before it climbs higher for several reasons.

The Canadian company is growing its revenue market share. By September 2021, OrganiGram held a 7.7% share of the Canadian market, up from 3.9% in January.

According to its third-quarter report, it had gross revenue, sales before accounting for excise taxes, of 29.1 million Canadian dollars through in the quarter -- up 31% year-over-year (YOY) and an improvement of 51% sequentially.

OrganiGram is in a much better position to grow now that it has paid down its long-term debt, paying off its CA$58.5 million balance with a syndicate of lenders. That will mean, the company said, an annual interest savings of CA$2.7 million.

Village Farms International is down 6% over the past three months. Looking at the company's third-quarter numbers, there's plenty of room for share growth. A big key for the Canadian cannabis company has been the success of its subsidiary, Pure Sunfarms, which the company said has the top-selling dried flower in Ontario, Alberta, and British Columbia and has had 12 consecutive quarters of positive adjusted EBITDA.

Village Farms just reported third-quarter numbers Tuesday, and they helped push the stock up. The company reported total sales of $72.4 million for the quarter, ending Sept. 30, up 68% YOY and 3% sequentially. More importantly, the company had a profitable quarter with $0.7 million in net income, up from $0.5 million in the same period in 2020 and an increase from the $4.4 million loss it reported in the second quarter. It also had $6.7 million in positive adjusted EBITDA, up 49% YOY and 338% sequentially.

What I like about Village Farms is it is well-positioned to benefit from the growth of cannabis sales in the United States. And the company owes that to its recently completed acquisition of Colorado-based Balanced Health Botanicals, which is known for its family of hemp-derived CBD brands but would give Village Farms a platform to sell high-THC products in the U.S., once it is allowed to do so.

Green Thumb Industries stock is down 12% over the past three months. On Wednesday, after the market closed, the company posted another strong quarter financially, reporting third-quarter revenue of $233.7 million, up 5.3% sequentially and 48.7% YOY. The company said it had $20.2 million of net income ($0.08 per diluted share), its fifth consecutive quarter of profitability. Adjusted operating EBITDA was $81.2 million, up 2.4% sequentially and 52.6% YOY.

With solid financials behind it, there are two other reasons I see growth ahead for the Chicago-based cannabis company. It has done a great job of promoting its brands -- Beboe, Dogwalkers, incredibles, Rythm, Doctor Solomon's, and The Feel Collection. With growing competition in cannabis, it is important for multi-state operators (MSO) such as Green Thumb to do something to stand out.

It also has a huge footprint that could easily double over the next couple of years. It just opened its 66th store but has licenses for 114 across 14 markets in the United States. It's the second-largest MSO so far this quarter, behind only the $317 million in revenue posted by Curaleaf.

Looking for the right stock

Green Thumb International, because of its size and ability to grow, is the safest choice of the three cannabis stocks. However, the two other stocks, because they are less known, provide more opportunity for share growth -- OrganiGram Holdings, in particular, continues to beef up its market share and won't be a secret for long. Village Farms International, through its subsidiary, Pure Sunfarms, is showing that high-quality plant yields can make a huge difference to the company's bottom line.

This Cannabis Company Just Pulled Off a Miracle
401%