Electric vehicle start-up Canoo Holdings (NASDAQ:GOEV) said in conjunction with its third-quarter earnings report on Monday that it is accelerating its manufacturing plan and now expects to begin building vehicles at a factory in Oklahoma before the fourth quarter of 2022.

Canoo reported a net loss of $80.9 million ($0.35 per share) for the third quarter, much of that attributable to research and development expenses and administrative spending. Wall Street analysts polled by Thomson Reuters had, on average, expected a larger loss of $0.44 per share.

The company had no revenue in the quarter, and none was expected.

Texas-based Canoo is preparing to launch a series of electric vehicles based on its proprietary "skateboard" platform, which incorporates motors, batteries, suspension, and chassis structure into a single unit that is designed to be as flat as possible, to maximize the usable space inside the vehicle. Among the noteworthy points management made in the report: 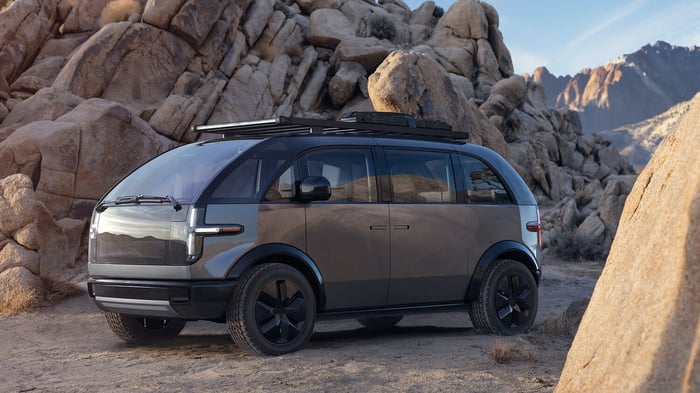 Canoo now expects to begin production of its first product, the electric Lifestyle Vehicle, before the fourth quarter of 2022. Image source: Canoo.

Separately, management said that it has selected a site in Bentonville, Arkansas, for the company's headquarters, and a separate site in Fayetteville, Arkansas, for a research and development center, and that it is planning additional facilities near its factory in Oklahoma.

What Canoo's CEO had to say

CEO Tony Aquila said that the company expects more than incentives from the deals to build facilities in Arkansas and Oklahoma.

"In June, we announced Pryor, Oklahoma, as the location for our owned manufacturing facility," Aquila said. "We have expanded this partnership to include Arkansas and additional locations in Oklahoma."

Aquila said that the new deals will bring Canoo about $100 million in incentives, on top of the roughly $300 million it has already received from Oklahoma. "In addition, with these agreements, we are targeting approximately $100 million in vehicle orders with the states and universities where we are locating these facilities."

Expectations for the fourth quarter