This company should continue to produce durable profits and is trading at a dirt-cheap valuation.

In today's investing environment with broad market earnings multiples near all-time highs, it can be tough to find new stocks to invest in. A lot of stocks, especially high-growth software and technology stocks, trade at price-to-sales ratios (P/S) of 10 or higher, which will make it tough to produce robust returns over the next five to ten years. This doesn't mean it is time to sell all your holdings, but you should be prudent with any new stock purchases right now.

If you have some spare cash available as we close out 2021, the one stock I'd recommend buying is Nintendo (NTDOY 0.37%). Here's why. 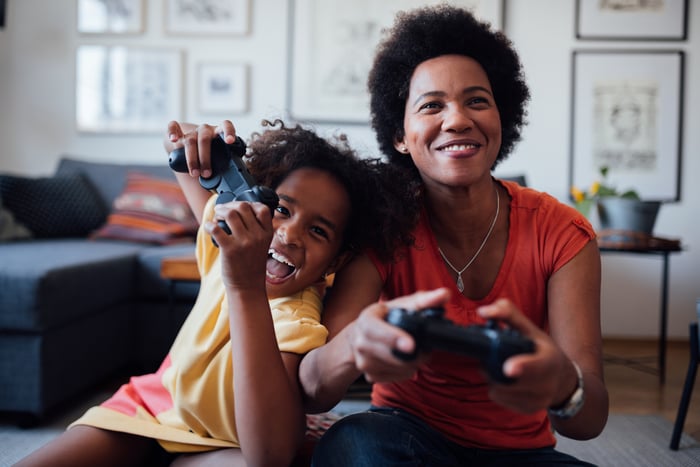 The staying power of the Switch

Nintendo is a well-known entertainment company out of Japan that has dominated the video game landscape for decades. It has done so with durable gaming franchises like Mario, Zelda, Pokémon (it has a large stake in the Pokémon Company), and Animal Crossing, which have put out tons of hit games over the years, but also by selling its own gaming hardware. Most recently, the company produced a hit with the Nintendo Switch, a hybrid hardware device that lets players use the same console to play on a TV or on the go with its handheld setup.

Since its release in 2017, the Switch has sold almost 93 million units and should outsell one of Nintendo's most popular consoles, the Wii, by the end of the company's fiscal year in March of 2022. The Switch is obviously a hit, but a lot of investors worry about the short-term nature of Nintendo's past gaming devices, which have caused huge drops in sales and profits in the past. The company is trying to alleviate this with its strategy for the Switch. It recently released an updated Switch OLED model with a better screen and updated features.

According to management, this is helping the Switch maintain popularity longer than Nintendo systems of the past. This is showing up in the player community numbers, too. Through the first half of this fiscal year, there have been 79 million active users on the Nintendo Switch, which is almost as much as the 87 million that played all of last year. Hardware sales and playing users are both important metrics for Nintendo since both lead to software/game sales, which is where the company makes the majority of its profits. With these strong numbers, Nintendo raised its full-year guidance for software sales and operating profit, up to 200 million units and $4.5 billion, respectively, for the 2022 fiscal year ending in March.

If you are an investor in Nintendo, software unit sales and operating profit are also important metrics to follow in order to evaluate whether Nintendo is succeeding as a business.

Outside of its core gaming business, which makes almost all of the company's profits right now, Nintendo is slowly expanding to different entertainment forms. This will not only bring in more revenue and profits for the company but greatly expand the number of people who are exposed to its famous characters. According to management, the expansion plan will have four pillars.

First, the company is going to expand its merchandise strategy with toy and apparel partners. For example, this year Nintendo partnered with LEGO for a Luigi's Mansion set and with Puma for Animal Crossing shoes.

Second, the company is partnering with augmented reality developer Niantic (which Nintendo is an investor in) to make mobile applications based on Nintendo characters. The first app is out, called Pikmin Bloom, which will hopefully garner more fans for the franchise.

Third, Nintendo is expanding into theme parks in a partnership with Universal. Only one Japanese theme park has been opened so far, but more are planned for Singapore, Hollywood, and Florida. These will take many years to build and expand but can be valuable long-term assets offering fantastic ways for families to engage with the Nintendo characters in real life.

Lastly, Nintendo is partnering with Illumination Studios to create an animated Super Mario Movie, which is coming out in December of 2022. In a recent conference call, Nintendo management said it wants to build more visual content (i.e. movies or TV) with different characters as well.

If Nintendo can execute this expansion strategy, the company will look a lot like Walt Disney (DIS 0.84%) five to ten years from now.

The valuation is highly attractive

Nintendo has a market cap of $57.9 billion, which is down significantly from the start of this year. In fact, the share price is down around 30% this year while the S&P 500 is up 27%. If you subtract the $12.8 billion in cash on Nintendo's balance sheet, the stock has an enterprise value of $45.1 billion, and that is before including the value of its stakes in the Pokémon Company, Niantic, and other developers, which could be significant contributors to the company's market value in the coming years.

With forward guidance for $4.5 billion in full-year operating income, Nintendo stock trades at a forward enterprise value-to-operating-income (EV/OI) of 10, which is a lot cheaper than the average market earnings multiple.

With the combination of Nintendo's highly profitable gaming business, the expansion into other entertainment mediums, and its dirt-cheap valuation, Nintendo is the one stock I'd buy right now.

Up 7% This Year, This Entertainment Stock Is Still a Screaming Buy
395%